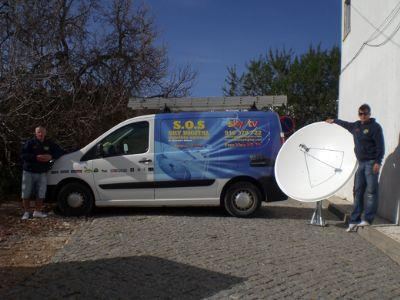 Chris Whitman from SOS SKY Digital, which has been operating in the Algarve for 12 years, sent us this article to explain, in simple terms, the situation regarding British TV viewing in the region. We are publishing it in the hope that it can dispel some of the concerns of our readers.

Over the years, Sky has reduced the signal over Europe, but we have kept up with these changes by using larger prime focus dishes and a high quality LNB to hold the low signal day and night. We were assured that when SKY changed its satellite from ASTRA 1N to 2F that the larger dishes would be strong enough to cope.

Well, that will be the case for the pay-per-view channels, however for the free view channels they have decided that they may not be sending them over Europe and intend to put them in a tight beam over the UK only.

Already some people have lost Channel 5 and its sister channels along with some of the ITV regions, but not all.

Rumour has it that we would lose the rest of the free channels by Christmas.  We have it on good authority that the BBC has released an official statement saying that we will not lose our channels until late next year, if at all.

At the moment, nothing is set in stone and they could yet opt to send the signal on the European beam allowing us to get them after all.

Please don’t panic as it may, or may not, materialise, and if it does, we will find an affordable solution to overcome the problem and make it common knowledge via the newspapers and KISS FM.

It is not in Sky’s interest to totally stop the signal over Europe due to its millions of packages, so we still have hope.

I would like to wish everyone a Happy Christmas and a prosperous New Year (hopefully with SKY free view TV!).