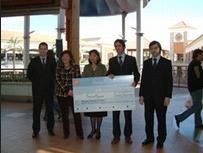 A MUCH-NEEDED new Paediatric Emergency Unit will shortly be built at Faro Hospital, thanks to the huge success of a recent fundraising event organised at the Forum Algarve shopping centre in Faro, reports The Resident’s Caroline Cunha.

A cheque for 117,000 euros was presented to Ana Paula Gonçalves, president of Faro Hospital’s board of administration, during a ceremony held at Forum last Friday, attended by the Secretary of State for Health, Carmen Pignatelli, and the president of the Algarve Regional Health Authority, Rui Lourenço.

Work to construct the new 700sqm unit will begin within three months, following a public tender, and the aim is for it to be completed within 18 months. The total investment involved represents around 300,000 euros, which will be partly funded by the state.

Skating to save children’s lives

An ice rink was erected at the shopping centre last November, giving families the chance to enjoy skating over the Christmas and New Year period while, at the same time, contributing to the cause. When the temporary rink closed at the beginning of February this year, more than 20,000 people had skated, each paying two euros into the fund. Money was also raised through sponsorship, with insurance firm Seguro Directo paying 40,000 euros in return for advertising panels around the rink and private health organisation Grupo Português de Saúde donating a further 20,000 euros. The centre’s shops gave a joint donation of almost 6,000 euros and further funds were collected through donations given by the general public. As well as traditional collecting boxes being placed around the shopping centre, an original plan was developed to help bring in more funds. A children’s play area with a hospital theme was set up, offering a daily walk-in clinic for ‘poorly’ teddy bears and ‘injured’ toys. For two months, the area was staffed by off duty paediatricians and nurses from Faro Hospital, and parents were invited to offer donations in return for the ‘consultations’.

In addition to the large amount raised at Forum, two local schools also donated 2,000 euros to the appeal. Pupils from the Mãe Soberana school in Loulé and students from the Vilamoura International School raised money through selling Christmas hampers that they had made themselves.

During last week’s presentation, the press were shown a video that clearly demonstrated the unacceptable conditions at the existing Paediatric Emergency Unit. It is extremely cramped and such is the shortage of space that children over 12-years-old have to be assessed at the adults’ emergency unit, which staff feel is unacceptable.

The waiting room is tiny and means that germs can be spread from one child to another. Elsa Rocha, a paediatrician at the emergency unit, told The Resident: “It is so cramped that while your child is waiting to be seen for one condition, they are sure to pick up another bug and be back in 15 days to be assessed again.”

The consultation room is separated from the waiting room by swing doors and doctors and their patients are constantly interrupted with people coming in and out.

The unit moved to its current premises as a temporary measure and the department was expected to remain there for only 15 days. But, 14 years later, it is still there! “It is very difficult for us to work like this. We would like to do more but our hands are tied,” Elsa Rocha said.

On visiting the unit, which incidentally measures only 176sqm, The Resident witnessed that, in place of consulting rooms, there are just a series of tiny cubby holes off a minuscule corridor. The waiting room is a small square-shaped room, with peeling paint and ancient chairs, offering no toys or comfort for children waiting to be seen.

Despite the lack of facilities, José Maio, director of the paediatric services, informed The Resident that the average number of children seen at the unit per day is close to 100, although as many as 120 can be assessed in a day. “We saw a total of 36,000 children at the unit in 2005,” he said.

While the medical team is enormously dedicated, they feel that the children deserve more. It appears that the paediatric section has been last on the list to receive investment, with higher profile adult departments being upgraded first.

Although the results of the appeal at Forum Algarve were fantastic and the future for the hospital’s young patients appears much brighter, The Resident was interested to know why the situation at the unit has been left to become so desperate.

Rui Lourenço, president of the Algarve Regional Health Authority, explained that Faro Hospital was built in the 70s and is now over 25 years old: “The hospital was built with a much smaller population in mind. With the advent of tourism and the rapid growth of the population in the Algarve, the hospital’s resources are no longer adequate.” Rui Lourenço also concluded that improvements were on the way, but now, thanks to the private contribution from Forum Algarve, “we can have a new paediatric unit at Faro Hospital sooner than if it had been purely state funded”. He also mentioned that the new Hospital Central planned for the Algarve would improve the present healthcare offered in the region.

Secretary of State for Health, Carmen Pignatelli, was eager to inform the assembled press that the problem of offering sustainable public health solutions is not only Portugal’s, as many other European countries are also facing similar situations. “What is important is sustainability in both a financial and social sense. The challenges we face are that populations are continuously increasing and, nowadays, there is a longer life expectancy,” she said.

Pignatelli also spoke of the need for wider social responsibility and stated that it was important for the general public and the private sector to be involved in projects such as the one developed at Forum Algarve.

Ana Paula Gonçalves, president of Faro Hospital’s board of administration, was clearly delighted that the hospital will soon offer improved facilities for children. The unit will occupy the space vacated by the gastroenterology department, which has been given a new area, and 80 per cent of the equipment to be installed will be brand new. “It is an honour and a great responsibility to have this project in my hands,” she said, thanking Luís Pereira, director of Forum Algarve, the driving force behind the fundraising initiative.

Luís Pereira thanked the sponsors, the Regional Health Authority and the team at Faro’s existing paediatric emergency unit for all their help in making the appeal such a success. He also praised the media for their coverage of the project and the shopping centre’s clients for their support and generosity.

All too often, a grand presentation is held with the media covering it extensively. However, deadlines are then not met, opening dates are pushed back and some plans even appear to vanish in a puff of smoke. This seems particularly evident when there has been a change in government or council. However, one thing is very clear, Forum Algarve is 100 per cent committed to making the project a reality.

Speaking to The Resident after the presentation, Luís Pereira said: “I am going to make those responsible for the project stick to the deadlines and, by the end of 2007, there will be a new paediatric emergency unit.” He continued: “Forum Algarve would never get involved in a project like this if the total investment amount required and the deadline were not fixed from the beginning. We feel an enormous sense of responsibility and take this project very seriously. I’ll be pushing them all the way,” he smiled.