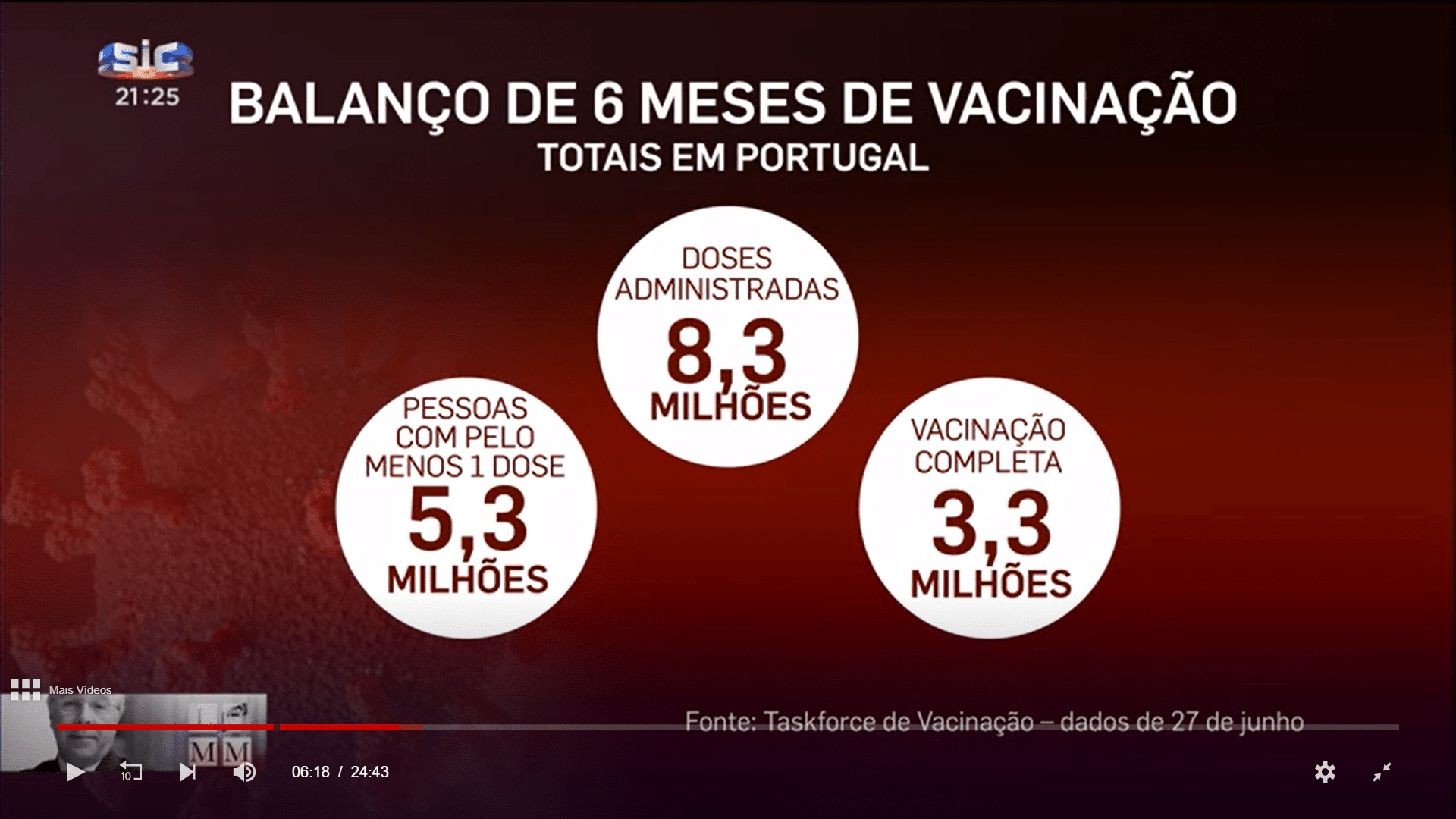 Six months into Portugal’s Covid vaccination programme and over half the country (5.3 million people) have received at least one shot of one of the approved vaccines (Pfizer being the most administered).

Giving a round-up of the ‘situation so far’, SIC television commentator Luís Marques Mendes explains that data so far shows 3.3 million fully-vaccinated (in other words, a third of the population).

In terms of numbers, this means vaccinating roughly 90,000 people per day.

Using data released by Public Health England, Mr Marques Mendes reinforced the message that the situation in Portugal may be high when it comes to numbers, but these are not, for the time being, resulting in an overload for the health service.

Some hospitals in Greater Lisbon have found ICUs edging up to ‘high capacity’, but  solutions if this continues will be to transport patients to hospitals in areas where pressure is less. This far, there has been no need for this.

As for ‘vaccine efficacy’ to the Delta variant storming through populations –  again using British figures – Mr Marques Mendes stressed that anyone with their full complement of shots stands to have “more than 80% protection”.

Taking the two ‘leading vaccines’: Pfizer and AstraZeneca, the first is seen as reducing hospitalisations in the case of infection by the Delta variant by 96%; the second by 92%.

The Delta variant is described as doubling the risk of hospitalisation in comparison with the Alfa (British) variant, though risk of death is “about the same”, he told SIC’s anchor Rodrigo Guedes Carvalho.

Luís Marques Mendes’ commentary preceded today’s Covid bulletin which reported six deaths in the last 24-hours (five of them in the Lisbon area which is the most blighted by the Delta variant) as well as another 1,746 new cases.

The positive slant of the bulletin is that numbers in hospital have fallen by 10 patients, and the numbers of infected have fallen by 1,677 (meaning people who tested positive in mass testing campaigns are now no longer testing positive).

Concluding his round-up of the first six months of Portugal’s military-led vaccination campaign, Mr Marques Mendes stressed there are two areas where authorities need to ‘make up their minds’.

One is in the area of pregnant women. Should these be vaccinated, or not? People need to be guided, he said.

The other is orientation for the vaccination of young teens.

Mr Marques Mendes says these age groups will start being offered jabs from the third week in September (ie just when schools start returning after the summer), but it is time health authorities started discussing this and ‘informing families’, he said.

Elsewhere, health minister Marta Temido has been telling TSF radio that it is time to ‘revise and update’ the percentage (of people required to be vaccintated) for herd immunity as the Delta variant is so much more transmissible than previous strains.

“The vaccine is not in itself a guarantee that people won’t become infected”, she said. “But it (offers) a probability of greater protection.

“Even so we have to maintain the behaviour we have learnt to adopt and, do so for an even greater period of time”.

One aspect raised on SIC’s evening news last night were the numbers of people booked into vaccination centres for their 1st or 2nd shots who don’t appear on time.

‘Absences’ are running at well over 150 per day in some centres – two have reported ‘no shows’ to the tune of 300 per day – which plays havoc with the whole process.

As mayor Marco Martins in Gondomar explained centres can be left with unused vaccines which they then have to try and find takers for. This requires ringing round numbers on file, and ‘takes time’. The problem is once ‘ready to administer’ a phial of vaccine cannot be refrozen. It has to ‘go into an arm’ or into the bin.