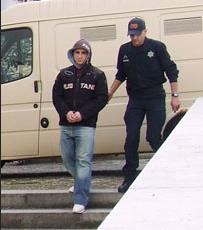 VICTIMS WERE BRITISH AND DUTCH RESIDENTS

SIX ROMANIAN men, including one who is on the run, have gone on trial in connection with a series of violent robberies at isolated houses in Faro, Olhão and Loulé between 2006 and 2007.

Marius Lovin, 21, Alexandru Stoica, 21, Claudiu Vilcan, 29, Marius Lazar, 32, and Ion Radu, 32, appeared in Faro court for the first time on Monday accused of several crimes of aggravated robbery, kidnapping, coercion and IT fraud, including stealing the credit and debit cards and the pin codes of the victims (see The Resident, December 29 2006 and February 9, 2007).

Gheorge Ancuta, who is 26, was never caught by the police and has been on the

run since January 30 last year when the others were arrested.

The court heard that the victims of the Romanian group were mainly British and Dutch citizens living in isolated houses.

legal system and mainly used in cases of extreme violence.

The jury is made up of eight members of the public. It is expected to deliver its verdict in two to three weeks.

After the identification procedures, the judge presiding over the session asked the suspects if they had anything to say.

All of them, except Marius Lazar, answered they had “nothing to say”.

Supported by a Romanian translator,

Lazar, who has been in preventive custody in the Beja prison since his arrest, told the Court that he did not “know what had happened” on the days surrounding his detention and that he was “innocent”. He reported his routine on the days he was in Portugal, saying that most of the time the other members of the group were with him.

Marius Lazar’s action in addressing the court prompted an unexpected inquiry session by the presiding judges and Public Prosecutor, which resulted in all the witnesses who were to have been heard in court during this first session being transferred to later sessions.

At the end of the first day of

The trial continued on Tuesday with the first witness being a police agent who had been involved in the investigation.

In his report, the GNR investigator told the Court that the suspects were captured on CCTV cameras at a petrol station on the A22, when they were taking money from an ATM machine with cards from their victims.

The trial is expected to last for at least two more weeks.