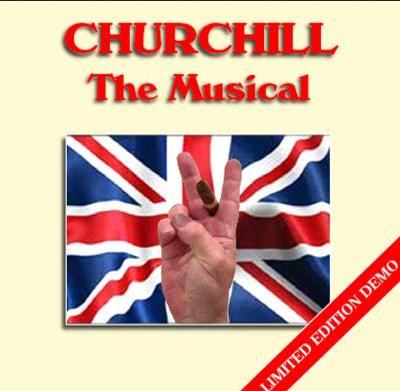 After completing the soundtrack, recorded at their Algarve Recording Studio (ARC) in Moncarapacho, the two business colleagues have now begun the process of arranging stage performances of the two-act stage play about Britain’s most popular prime minister.

Composer of Churchill – The Musical, Trevor Holman, told the Algarve Resident: “As well as a theatre in the Algarve being interested in staging the musical, we also have had interest from around the world, including a theatre in Britain that is interested in staging the world premiere of the show, which would be a big event, and also in San Diego, Madeira and Holland.”

Trevor Holman and Derek Ash have plenty of experience between them in the music industry.

Trevor started his career as a session musician for top recording studios in London where he orchestrated and arranged many top hits during the 1970s and now works as a record producer.

Derek Ash, who wrote the lyrics for the musical, has also co-written the musical Atlantis and has more than 200 songs to his name.

“We decided we wanted to work together on a musical,” Trevor Holman said. “We thought Sir Winston Churchill would be a historical figure that people could relate to. He was part of an incredibly important time of our history and we hope the musical will help preserve the bravery shown throughout the Second World War.”

He added: “When you are writing a musical about someone’s life, it is hard to know where to start. We decided the most interesting and important part of his life was from the beginning of his married life through to the time of his resignation from public life.”

Trevor is currently looking for anyone who wants to be involved in the staging of Churchill – The Musical.

If you are interested in being a part of the show, please contact Trevor on 917 010 189 or email trevor.holman@live.co.uk Copies of the 18-track soundtrack are now available to purchase for 11.65 pounds sterling from www.churchillthemusical.com which is available in English. Anyone purchasing a copy of the CD will receive a voucher for a special ‘2 for 1’ ticket offer, which you can use at a later date when you choose to purchase tickets for the show.