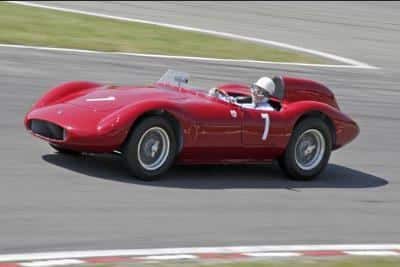 The biggest classic motor racing event ever to be held in Portugal is taking place later this year at the Algarve Motor Park near Portimão.

The Algarve Historic Festival will be held from October 16 to 18 and more than 300 drivers will compete in 16 races during the three day event which will include 12 categories of historic and classic cars.

The schedule for the weekend includes 10 free practices and 10 qualifying sessions on the Friday and Saturday morning. The first of the 16 races will begin at midday on Saturday afternoon and the last race will commence at 5.30pm on Sunday, the final day of the event.

On Saturday, at 5pm, a very special race will be taking place when the British historic race organiser, Motor Racing Legends, will be running The Sir Stirling Moss Trophy in celebration of the legendary racing driver’s 80th birthday. Spectators will be able to watch Sir Stirling take part in the 1950’s sports car race, driving his very own 1956 Osca FS 372 race car.

There will also be two other major attractions at the event. The Mini 50 Year Commemoration Charity Parade and the Ferrari, Maserati and Osco European Charity Parade will take place in aid of a children’s welfare, protection and healthcare organisation.

Owners of the cars will be able to do a circuit of three laps on the race track while contributing 50 euros to the campaign.

Social activities have also been arranged during the weekend. Entrants to the event will be welcomed with a barbeque and a drink in the paddock on the Friday afternoon and on Saturday night, a dinner and a show has been organised at Vilamoura Casino.

The festival promises to be an exciting event especially as former Formula 1 drivers such as Maria Teresa de Filippis, Jochen Mass, Bobby Rahal and Richard Attwood will also be participating.

Paulo Pinheiro, CEO of Parkalgar which manages the Algarve Motor Park, has already signed a three year contract with the promoter of the event, Francisco Santos, for the event to be held at the race track until 2011.

Grandstand, paddock and VIP tickets are already on sale. For more information on how to purchase tickets, please visit www.autodromodoalgarve.com or www.franciscosantoseventos.com (both available in English).