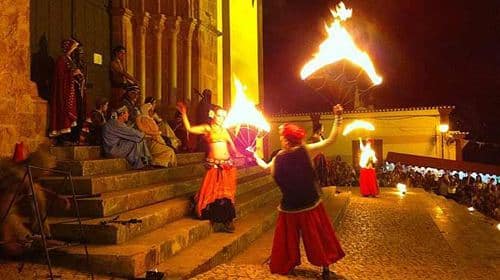 Success || The 10-day Silves Medieval Festival has been hailed a success by organisers, registering 2.6% more visitors to this year’s event compared to 2013.
A total of 9,000 bracelets (at €4 each), giving full access to the fair, and 64,000 daily tickets (at €2 each) were sold while the fair’s special shows and tournaments also saw 10-16% increases in attendance.
Silves mayoress Rosa Palma said the “fair’s popularity” increased yet again and announced that the event would certainly be returning for its 12th year in 2015 between August 7 and 16.
The goal, she says, is to keep the structure of the fair “intact” while also adding new features.
The Silves Medieval Fair is widely considered one of the Algarve’s most important summer events, firmly putting the town of Silves on the map. It usually fills up the town’s streets with merchants selling a variety of handicrafts, sweets and other Arab-inspired goods, street performers dancing, singing and playing music, and medieval taverns offering ancient delicacies. There are also battle re-enactments, horse-riding tournaments, fire shows and much more.