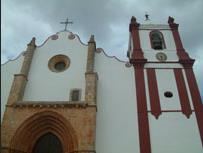 SILVES CATHEDRAL, which is in urgent need of repairs, received a discreet visit on Wednesday (May 28) from Portugal’s secretary of state for culture, Paula Fernandes dos Santos.

After a private visit to the cathedral with Silves Câmara President, Isabel Soares, and the regional director of culture for the Algarve among other council members, Paula Santos told The Resident: “I have come to visit inside the cathedral for the first time, as I had previously only ever seen it from the outside.”

Paula Santos said that the building is in urgent need of repair but did not, however, give any indications as to a possible date for the work to begin, saying that “solutions are being studied”.

Silves Cathedral is also being repainted by local painter José Perpétuo who told The Resident: “I have been commissioned to paint the outside walls of the cathedral, but I offered to paint all of the doors free of charge.”

A spokesman for Silves Câmara told The Resident: “We decided to paint the outside of the building, an action that has not been opposed by the Ministry of Culture; however we cannot carry out any work inside without its permission.”