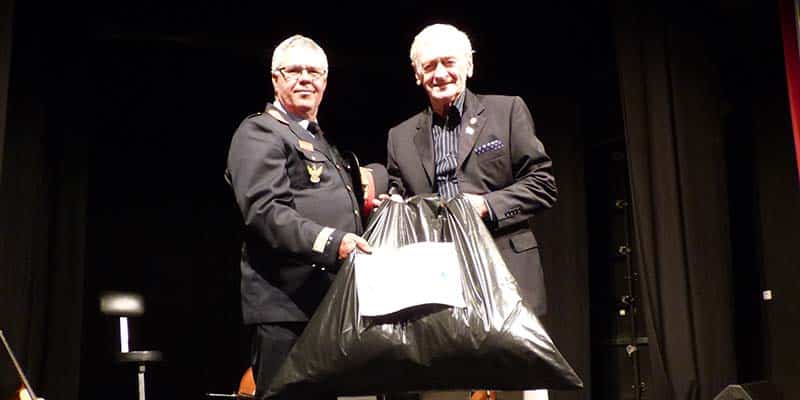 Last Saturday the Silves Rotary Club held its seventh annual benefit concert in the Teatro Mascarenhas Gregório in Silves, in aid of Silves Bombeiros and Rotary Education Projects, raising €2,734 from the tickets and donations.

Cool Manouche, an Algarvean Gypsy Jazz band, played to a packed house in the beautifully-restored theatre. The audience were enthralled with the swinging music which featured Ray Bartlett and Luís Fialho on guitars, Rick Steffens on double base and Betty M on vocals and violin. Favourites such as “Nuage”, “Bossa Dourada”, “All of Me” and “Minor Swing” had the audience spellbound, demanding an encore and many purchasing the band’s recently released CD.

At the end of the concert, past president David Trubshaw surprised the Silves Commandant António Nunes with their “Bombeiros Sock Sack”, a bag of over 200 socks collected by club members who were asked to take socks to each Rotary meeting held this year. Firefighters desperately need socks as they spend long hours with soaking wet feet when fighting prolonged fires.

The Silves Rotary Club Education Projects work with nine local schools serving more than 1,700 students. Their Digital Media Project allows students to work with the mediums of film, music, art and animation, and culminates each March with the ‘Oscars ceremony’ which this year was attended by over 600 students, parents and VIPs.

This project is also linked with the Rotary’s School Exchange whereby students from Silves Schools exchange with students from Wildern School in Southampton, UK, and for many it is their first trip abroad.

The Rotary’s Art & Poetry project encourages students to produce art and poems which have been made into a book, Arte e Poesia (to order a copy, email davidmtrubshaw@hotmail.com)