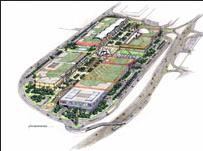 LAND FOR the planned construction of the Algarve’s largest shopping centre in Guia, Albufeira, has been bought by Imo Pan Iberian Retail, a real estate investment fund managed by the Iberian company, Imorendimento.

The land, which was bought from local construction company Urbanipera Lda to construct the Algarve Gran Plaza, represents a total investment of 88 million euros. This project, which now has a commercial licence, is due to be completed by May 2010.

The new shopping centre, which will be located on a 55,000sqm plot of land near the EN125, near other commercial spaces in Guia, will have 2095 parking spaces.

It will house around 80 businesses including shops, services and restaurants as well as providing direct employment for around 1,900 people.

According to a statement released by Imorendimento, an architectural project for the new shopping centre is currently being created by the companies Urban Value and F&A, with a public tender soon to be announced for its construction.

No sites for the Algarve Gran Plaza have yet bee sold, however Imorendimento said that “a significant list of well known international shops have formally shown interest in securing a point of sales there.”

The plan to build this shopping centre near the existing Algarve Shopping had previously come under fire as local shop owners have criticised Albufeira Câmara for jeopardising their businesses (see The Resident, March 14).