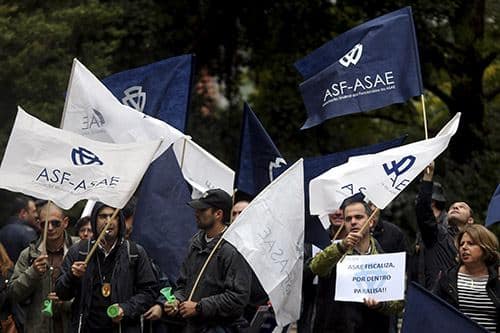 It has been billed as a “shocking” video clip, showing rotten meat, cockroaches and rats found in “kitchens without hygiene in restaurant establishments up and down the country”.

But in truth, it is an exercise in publicity to show the worth of Portugal’s health and safety inspectors.

In one of the shots, a cat is shown nursing her kittens in a box beside a sack of potatoes.

Other than the fact that the cat looks surprised – and a little uncomfortable – few country folk would actually find this shocking at all.

But, according to ASAE, it is against all the rules of good hygiene that have seen Portugal elevated to a position of touristic greatness.

Shots of ASAE’s intrepid taking to sea in an inflatable to ‘apprehend illegal shellfishing’ are more likely to infuriate than shock, but the organisation that regularly seizes market traders’ goods for purporting to be something that they aren’t insists that as a body with the powers of criminal police their lot is still far from ideal.

“Fighting for a Statute”, says the clip as the frantic music at last calms to a pace where viewers can catch their breaths and get back in touch with their retinas.

ASAE’s inspectors are “slaves”, we are told, people forced to work 24/7 “without the guarantee of a timetable that allows them to conciliate their professional life with that of their family…”

They earn just €4.93 an hour and operate “in conditions of risk and insalubrity”.

They have old vehicles to travel around in, and are short-staffed.

The shocks continue as now violins quiver in the background: ASAE has “received promises that have then been broken”.

Citing the manual of food and quality control established in Rome in 1993, the video stresses that ASAE inspectors should have salaries “commensurate with the responsibilities of the good job” that they perform.

The shock of the message here is ‘how can the country survive if ASAE is weakened?’

What use to Portugal would a ‘fragilised ASAE’ be?’

We are not given any opportunity to answer this loaded question as the last part of the video assures us that ASAE will “never lower its arms”.

Every day, the men and women that make up its “noble institution” will “honour and comply” the mission with which they have been entrusted.

The only warning ASAE gives is that it will “continue to fight for its rights” so that they can be “assured”.

No doubt, along the way, the Portuguese public will be assailed by more “shocking” images of the everyday horrors laid in the path of ASAE’s noble inspectorate.

We can but wait.