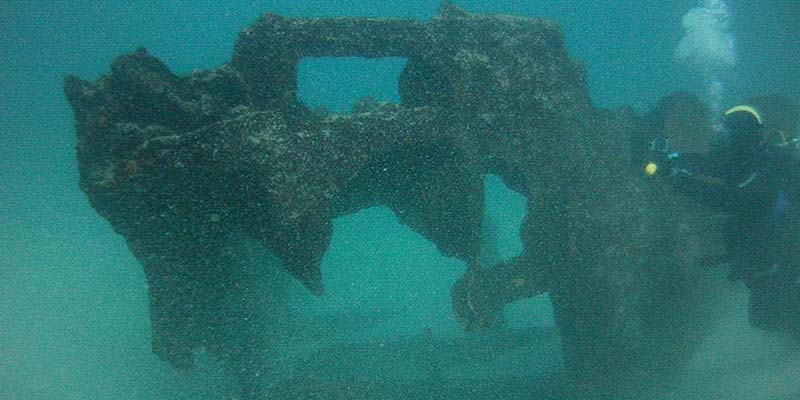 Extraordinary images have been circulating this week of the “Roumania”, a British steam ship that went down near Foz de Arelho (Caldas da Rainha) after hitting a sandbank over 126 years ago.

The 3,387-ton wreck has lain, covered by sand, just a few metres from the beach ever since.

But on the last day of 2018, two diver friends flying a drone in perfect weather over the unusually calm sea made the unexpected discovery: their drone captured an overhead image of the the boat – and they realised this was a unique ‘window of opportunity’.

Donning wetsuits and swimming out to the spot, they managed to capture eerie images of what is left of the boat in which 115 men women and children had been travelling from Liverpool, UK, to Bombay, in India.

No-one knows what exactly caused the Roumania to go down: it seems to have been a combination of human error and bad weather.

Suffice it to say, the boat was 20 miles off course and the accounts from survivors were harrowing.

Six Indians who made it ashore in a lifeboat ‘changed their stories’ for the British authorities because they were afraid of being blamed for not trying to help others on board, reported Público in a commemoration article last year.

But for local Portuguese, the Roumania’s disaster was a looter’s delight. The wreck was ‘stripped bare’ of everything that could be sold within weeks, despite attempts by the military to protect it.

Says SIC, the haunting images captured over New Year are all that’s left now that the sea has whipped up again obscuring the ghostly Roumania beneath the sands.