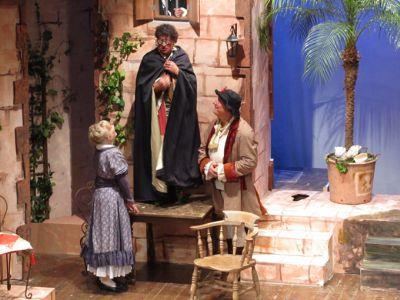 Twelfth Night was enthusiastically received by the audiences at the popular Lethes Theatre in Faro last weekend.

The theatre, which originally opened in 1845, is a classic example of a provincial playhouse of the nineteenth century and was the perfect setting for William Shakespeare’s play.

Presented by the A Portada Theatre Group and admirably directed by Priscilla Morgan, events revolve around brother and sister Viola (Marcia Meeuwissen) and Sebastian (Richard Williams).

Both think the other is dead following a shipwreck. When she lands in a foreign country, Viola dresses as her brother and adopts the name Cesario, becoming a trusted friend and confidante to the Count Orsino, played with panache by Nigel Barber.

Orsino is madly in love with the Countess Olivia (Diane van Hellemond), who is in mourning due to her brother’s recent death, which she uses as an excuse to avoid seeing the count, whom she does not love. He sends Cesario to do his wooing, and Olivia falls in love with the disguised maiden.

Diana van Hellemond plays Olivia as a haughty beauty quite undone by the strength of her feelings for the one she thinks is a mere boy, and when the truth comes out, she appears to be amused as well as shocked by the possible permutations.

Michael Reeve is an accomplished scene-stealer and his Sir Toby is suitably loud and full of bluster. Simon Tubb gave an accomplished performance that was hilarious and touching as the dim-witted Aguecheek. His manner of determined self-interest let down by limited intellect and bad timing was a constant delight and of course there is Feste (Thomas Hartman), the wise fool, around to keep everything in perspective.

Tribute should also be paid to the behind-the-scene team of volunteers, led by designer Lesley Sweeney, who put so much effort into making these productions so hugely enjoyable. Long may they continue …