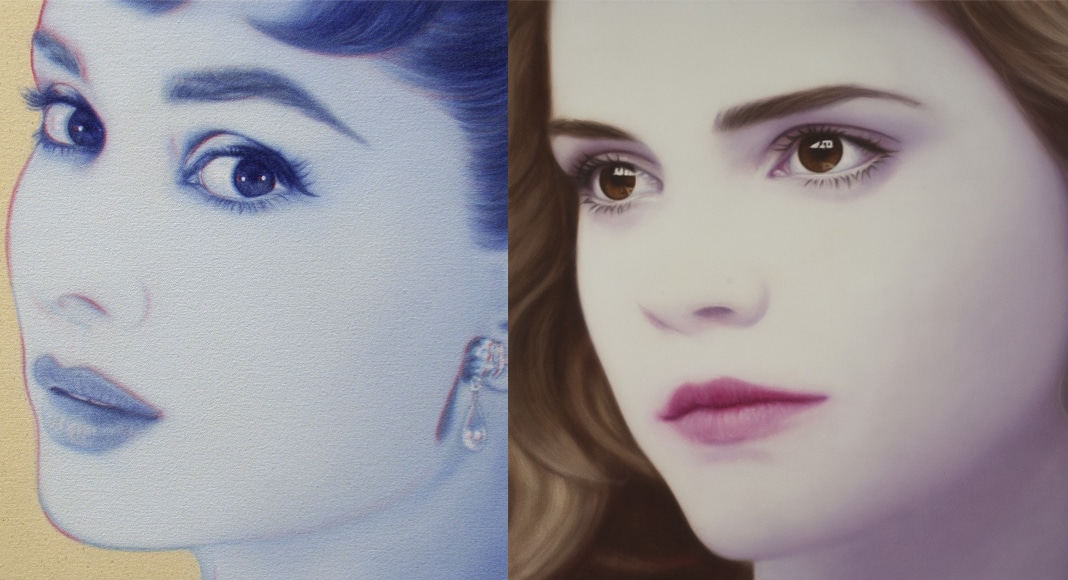 ‘There are certain shades of limelight that can wreck a girl’s complexion’ – Audrey Hepburn as Holly Golightly in “Breakfast at Tiffany’s”, 1961

The title of the exhibition alludes to the fickle nature of fame. Celebrity culture is momentary. Andy Warhol knew that. See ‘Marilyn Diptych’ 1962 (Tate Collection), where the iconic portrait of Marilyn is repeated in brilliant colours on the left, then the image gradually fades away into greys and is obscured by blackness on the right panel.

Of course, with fame comes fortune. And I’m sure Warhol would say something like, ‘Gee wow, that’s kinda cool’ were he alive today to see the sale at Christie’s of his ‘Shot Sage Blue Marilyn’ 1964 for an eye-watering €185 million, a record for both a US and a 20th century artist.

The title could also refer to the mythological notion of ‘shades’ in literature, which can be taken to mean the spirit or a ghost residing in the underworld. Perhaps these pale, beautiful portraits that radiate with a soft glow are the brief apparitions that flicker upon our screens. The ghosts in the machine – a mere impression of a fleeting form.

Josie McCoy has been painting portraits of characters from the world of film, television and music for over 20 years. In the main, they are female subjects, rendered with a subtle soft focus, far removed from the objectification of the male gaze. “…. Women have usually been the ‘passive’ subject of art. I aim to present them as active protagonists with agency and power.”

Josie consciously plays with the nuances of capturing artifice: “Painting, like cinema, also pretends to be the ‘real thing’. Both the television/cinema screen and the canvas are two-dimensional surfaces attempting to ‘describe’ three-dimensional space. So, there is an artificial medium describing another artificial one, which adds a layer of sophistication to the work.”

Josie also seeks to create a direct connection with the viewer. “Film and TV characters can act as means of communication. I am interested in what viewers bring with them, in terms of their personal memories and references, when looking at a painting of someone they recognise, and how blurred the line between fiction and reality can become.” Josie selects key moments in the narrative, helping the viewer to recognise the subject, captured in a close-up shot which, in turn, adds to the sense of drama.

This zooming into the image allows Josie to fill the canvas with the character’s faces “…to emphasise the eyes and mouth, which I see as the main means of connection and communication. Removing the background details that were part of the source photograph allows me to focus on the subject and recontextualise the image so that it functions as a portrait with very little information”.

Josie’s technique and process are extraordinary, using oil paint like watercolour; thin diluted layers “make the surface glow in an imitation of the cinema screen”. Layers are built up in glazes until finally Josie uses a soft brush to blend, leaving no brush marks.

The play of light is also a vital aspect of her portraits with her subdued palette emulating the light of a screen. Indeed, her work is often described as ethereal. “I want my paintings to glow…. I want the painted surface to appear hovering off the wall.”

Josie McCoy was born in Plymouth, UK, and currently lives in Valencia, Spain.

She graduated from the MA Fine Art course at Central Saint Martin’s, London, in 1999, and has since widely exhibited her portraits of fictional characters from the world of film, television and music.

McCoy has participated in numerous group shows worldwide, in the UK, Europe, South America and the US, most recently in the ‘RA Summer Exhibition 2021’, Royal Academy of Arts, London and ‘A Generous Space’ at Hastings Contemporary.

McCoy’s paintings are included in private and public collections including the BBC, Standard Chartered Bank, Collection of the University of Wales, The Centre of Attention Permanent Collection, Jeremy Mogford Collection, Borchard Collection of British Self-Portraits in the 20th Century and the Ofelia Martín & Javier Núñez Collection.Her paintings have been selected four times for the BP Portrait Award at the National Portrait Gallery in London and she was shortlisted for the Castellon International Painting Prize, Spain and the PS Mirabel Painting Prize, Manchester, UK.

She received a Woo Charitable Foundation Arts Bursary and was awarded first prize for the Centre of Attention Painting Prize.

She has been featured in Poets and Artists, Rebel Magazine, Arts Culture, Mums Abroad and The Guardian.

A private view will take place at Fresco Gallery on Thursday, June 9, from 6pm to 10pm. The exhibition runs until August.