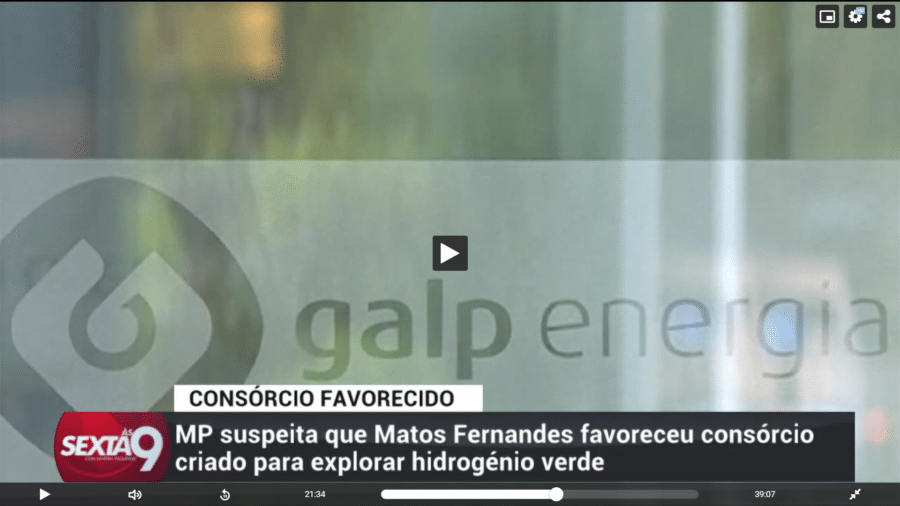 The investigative team of RTP’s Sexta às 9 has done it again. In 39-minutes last Friday it has managed to raise multiple points and insinuations into ‘underhand dealings’ by Portugal’s PS government – particularly with regard to the project to create a Green Hydrogen ‘cluster’ in Sines with ‘unlimited’ (for that read ‘hundreds of millions of euros in) EU funds.

What the programme didn’t refer to is that the government’s ‘brave new plans’ (which Sexta às 9 explains have been essentially ‘stolen’ from the man who suggested them in the first place), will now be dependent on decisions by an EU entity that has that man – Dutch empresario Marc Rechter – firmly on-board.

Since January, Mr Rechter has been a member of the Brussels’ based European Clean Hydrogen Alliance. He sits on the round-table for the production of hydrogen. These round tables are open to CEOs with “relevant activities in Europe in research and development” as well as “high level representatives of EU countries and regional public authorities”.

As ionline explained back in January, the round table is a consultative body that evaluates the best opportunities to be included in the EU’s clean hydrogen strategy.

“From Portugal, other than Rechter (who lives here and has multiple business interests in the field of renewable energies) only REN was invited to take part in this ‘hard nucleus'”, said the paper.

He told Sexta às 9 anchor Sandra Felgueiras that he feels “decisions were made that weren’t the best, but I think they can be remedied.”

His quiet explanations as to how the government behaved will simply have added to the intense media pressure rounding on the Socialist executive.

Sexta às 9 was the first television source to reveal ‘suspicions of corruption’ in the government’s awarding of licences for the exploration of lithium in Montalegre (click here). Now it has laid out what it claims to be the unsavoury back-story relating to the creation of a ‘consortium of Portuguese companies for the exploration and production of green hydrogen’, as the Public Ministry probe into suspicions of the trafficking of influences in this regard is understood to be still ongoing (click here).

The names of secretary of state for energy João Galamba, and environment minister João Pedro Matos Fernandes have been frequently ‘in the media frame’ in all these issues – with the latter also in the spotlight currently for his part in the waiving of €110 million in taxes that should have been paid to the Portuguese State by EDP over the sale of six hydro-dams to French energy company Engie last December.

As Sexta às 9’s narrative explains: “There are many more doubts that certainties on the real intention of the intervention of the minister of the environment in this opportunity of fiscal planning which he was warned about in advance.”

Enter the Movement for the Terras da Miranda – the region in which the six dams are sited. This group was formed to ensure municipal taxes generated by the sale were ploughed back into the ‘good’ of the community.

Members met with minister Matos Fernandes in September last year – before EDP sold to Engie – and, according to  Óscar Afonso and Aníbal Fernandes, warned him of the possibility that the €110 million in ‘imposto do selo’ could be lost in what is now being investigated by the AT tax authority as “aggressive fiscal planning”.

Mr Matos Fernandes has another take on the meeting however. He told parliament last week that the Movement met him to “ask a favour”…

This is the point where Sexta às 9 cuts to the exasperated voices of members of the opposition suggesting that this is yet another ‘scandal’ that could be discussed for years to come.

Programmes like Sexta às 9 are watched by millions of Portuguese who are already heartily sick of the way their lives and economic fortunes have been railroaded by the political powers that be.

This is a ‘key’ year in that municipal elections looming in which minority parties are hoping that people’s ‘discontent’ will rub off on the ballot box.

Sexta às 9 was ‘suspended’ back in July 2019 – hours before it was due to present another fierce critique on PS Socialists’ business dealings.

The reason given by RTP was that programme adjustments were needed in view of the imminent legislative elections.

It was only three months later, after PS Socialists had been returned to power, that the programme returned to the nation’s screens.

By coincidence, RTP’s director of information is relatively closely connected to prime minister António Costa, in that she is a niece of the man now married to his mother.