In fact, Quinta do Vale Meão 2012 Vinho Tinto (Douro) was even selected as the magazine’s fourth favourite wine. 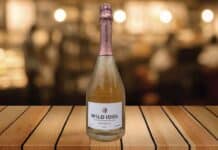