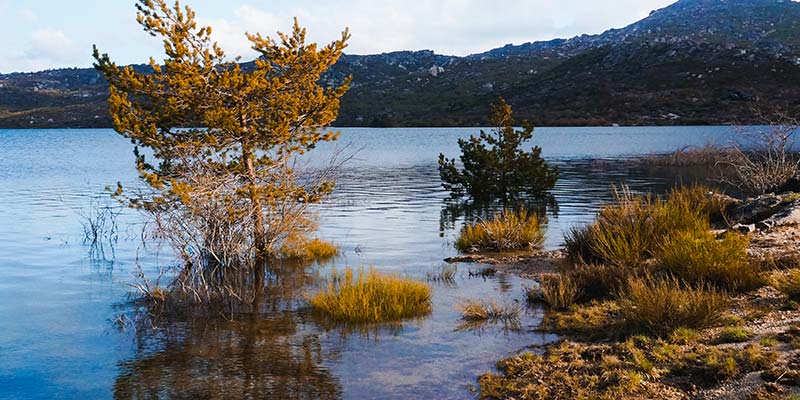 Last year, around April, some friends and I decided to take a road trip from Lisbon up to Serra da Estrela, to catch a glimpse of the snow before it melted away with the coming of spring. I had never before actually experienced snow falling, and I did not this time round either! That privilege was reserved for when I visited Budapest this year, where I also had the ‘pleasure’ of experiencing the feeling of snow melting inside my boots in -10°C weather. Luckily, the capital of Hungary is famed for its thermal baths as is Serra da Estrela, which has one of the largest therapeutic spas in Europe.

You will need a warm coat when visiting Serra da Estrela, the highest mountain range in mainland Portugal with the highest point at 1,993 metres (6,539 feet).

There is more than just snow upon the top of the mountain as there are 25 beautiful glacier lakes and several rivers to visit in the area. Glacier lakes are formed when a glacier erodes the land, then melts, filling the depression it created.

The local villagers tell an old story that there was a lake near the top of the mountain in which the wrecks of ships floated up to the surface, a story that is also mentioned in the classic book Moby Dick.

As I walked along the edge of one of the many lakes, I did not see any shipwrecks, but I noticed trees sprouting out of the water near the shoreline, reminding me of the story of Phaethon, son of Helios, the god of the Sun.

One day, Phaethon tried to drive his father’s sun chariot around the Earth. It is said that Helios tried to dissuade him as not even Zeus himself was strong enough to steer the horses. However, Phaethon disobeyed his father with tragic consequences. First of all, the Earth froze when the horses climbed too high, but when Phaethon lost complete control of the chariot and scorched the Earth by riding too close, Zeus decided to strike him down with a thunderbolt, to save the Earth from being set ablaze. Phaethon fell into the River Eridanos and his sisters, the Heliades, mourned his death for four months by keeping a vigil at the riverside until the gods turned them into poplar trees to stand by the river and always protect their brother.

As I stood upon the banks of the lake, I imagined the local villagers coming to mourn the loss of their beloved ones, lost in the wrecks of the ships floating upon the lake’s murky waters. I imagined that like the Heliades, as they stood at the edge of the water, their arms turned into branches and their tears turned to amber, leaves sprouted from the top of their heads, and they became forever rooted to the bottom of the lake and to the ones they lost.

Serra da Estrela gets its name from another local legend involving a shepherd and his journey to become closer to the stars.

The shepherd lived with his dog in a poor and small village, but he longed to adventure beyond the mountains that surrounded him. One night, a star descended from the skies above and told the shepherd that it was there to guide him to wherever his heart desired. So, the shepherd decided to call upon the star’s company and, for many years, he ventured through the mountains, crossing fields and rivers, villages and towns, with the star his only company during his old age. Eventually, the shepherd reached the peak of the highest mountain which, for his whole life, had stood as a barrier between himself and the world. As he gazed upon the vast horizon for the very first time, his heart was filled with warmth and free of desire. Since the mountain was closer to the sky and to the shepherd’s star, he decided to live out the remainder of his days upon the top of this mountain. Soon, the King heard word of a shepherd that each night talked to a star and thus the King commanded that the shepherd give him the star in exchange for a huge fortune. However, the shepherd refused as he could not live without his beloved star which had accompanied him all those years. When the shepherd passed away, he was buried in his favourite spot at the top of the mountain and that same night his star shone brighter than ever, eternally giving Serra da Estrela its name “Star Mountain Range”.

Nowadays, the mountain range is part of the Serra da Estrela Natural Park, the largest natural conservation area in Portugal which has over 300 kilometres of nature trails for visitors to enjoy. It is also home to one of the oldest Portuguese dog breeds, the Estrela Mountain Dog, bred by local shepherds to protect their livestock from predators.

These dogs were not recognised outside of Portugal before 1972 and their thick fur actually resembles goat hair! They are huge, loyal and intelligent dogs who are known to instinctively protect children in the family. We had one called Bonnie and she was one of the best dogs we have ever owned.

Serra da Estrela is the only place in Portugal where you are guaranteed snow in the winter and it has Portugal’s only ski resort, consequently it is a popular destination for people from all over the country. If you visit, you must try the traditional Serra da Estrela cheese, which is soft, gooey and compulsory if you are a big fan of cheese, like myself.