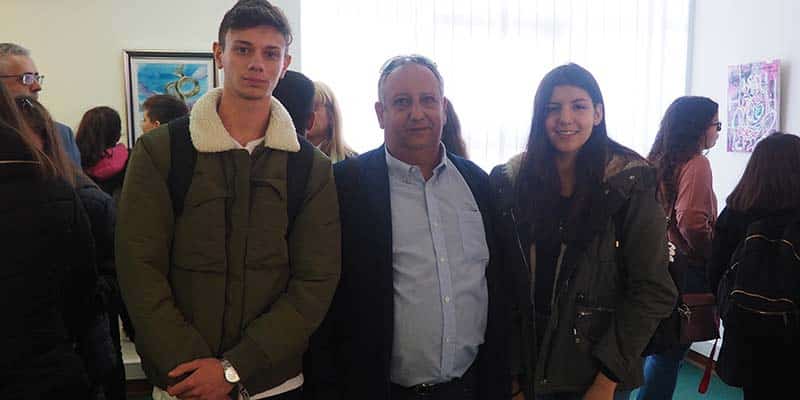 Secretary of State for Youth and Sport João Paulo Rebelo was special guest at a recent student art exhibit, sponsored by Sovereign-Portugal, held at IPDJ in Faro.

The Sovereign Art Students Prize Algarve 2019 exhibition was an opportunity for Rebelo to admire the standard of art produced. Along with other dignitaries and visitors, he voted for his favourite artwork, giving one lucky Algarve student the chance of winning the ‘public vote prize’.

The exhibition then moved to Lagos Marina where it will be on show at the reception until April 15, before the final display at the Lady in Red art gallery in Lagoa.

This is the third year that the Students Prize is run with the aim of inspiring, encouraging and rewarding young artists in the community.

Whilst the art is not for direct sale, it will be auctioned on May 11 at 3pm at Lady in Red as part of the grand final where the winning students will be attributed their prizes, with €3,100 being awarded between the artists and their schools.

The first and second prizes are selected by the judges while the public vote prize will be awarded to the artwork which receives the most votes from the public, both online and directly during the exhibitions. To vote for your favourite, go to www.sovereignartfoundation.com

The Sovereign Art Foundation (SAF) student prizes are run to celebrate the importance of art in the education system and recognise the quality of art produced by young students. Through their contemporary art prizes and student prizes, the foundation has so far raised more than US$6 million for artists and charities worldwide.

If you wish to attend the auction to bid on one of the outstanding pieces of art, contact Isobel Costa on icosta@sovereigngroup.com or call 282 340 480.

The proceeds from the sales will be divided between the artists and Sovereign’s chosen charity project, School Art Workshops organised by artists David Trubshaw and Gudrun Bartels on behalf of the Rotary Clube de Silves.