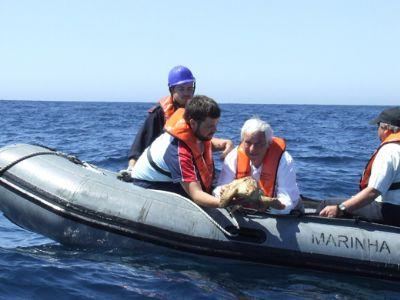 Four sea turtles were given a second chance at life in the wild when a team of experts from the Albufeira-based marine conservation centre Zoomarine joined forces with the Portuguese navy to release them into the ocean on Friday, July 17.

As well as navy personnel and the team from Zoomarine, 15 children from disadvantaged families and the Casa dos Rapazes orphanage were chosen by Faro’s Rotary Club to take part in the journey that saw the turtles transported 20 nautical miles, around 40km, from the coast of Portimão in the navy ship NRP João Coutinho.

During the journey, Élio Vicente, marine biologist and director of science and education at Zoomarine, told the Algarve Resident: “Releasing these turtles back into the sea today is very important because for every 1,000 that are born, it is estimated that only one reaches adulthood.”

The four common sea turtles of the species Caretta caretta were all rescued and each has a different story to tell.

“We name each animal that we receive,” said Élio Vicente. “Fauno, for example, weighed less than half a kilogramme when he was rescued by professionals from the national conservation and biodiversity institute from the tank of a sea food restaurant. Now after 10 months with us and weighing 6.4kg, he is ready for a second chance.”

A second turtle, Gulliver, was found in difficulties in the sea by divers and taken to Zoomarine weighing one kilogramme. After rehabilitation and weighing 2.7kg, he was also ready for release.

The final two, Golias and Gizmo, were both caught in fishermen’s nets.

“We are very grateful to fishermen who now know that we are here to receive marine animals that are accidentally caught and look after them instead of throwing them back to sea and allowing them to die,” said Élio Vicente.

Next month Zoomarine plans to release two giant sea turtles into the wild.

“These have been in tanks for many years so we do not know whether they will be able to survive successfully and join the turtles’ natural migratory route through the oceans but we are lucky to have been able to invest in two satellite transmitters, costing 15,000 euros, that will enable us to track them for many months and if necessary fetch them back,” he said.