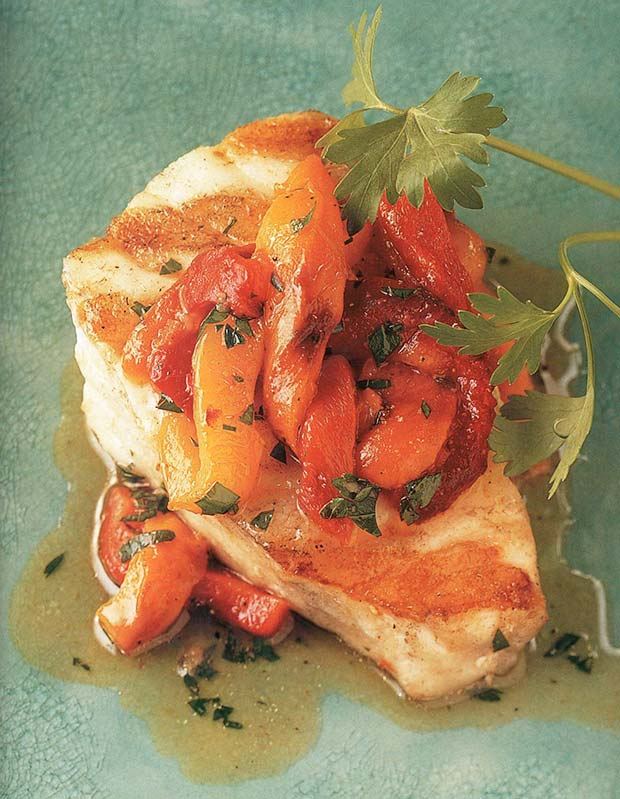 I was having lunch with a “foodie” friend the other day in a great little restaurant in Praia da Luz, and he said how he was getting sick of going to restaurants and having, as he put it, “mucked about” food!

I do have some sympathy with this point of view and have come up with this recipe for the BBQ which is for all of you who want the basic ingredient to sing and keeps the “messing about” down to a minimum.

Sea bass (robalo) is plentiful and really good at the moment. Do not be shy in asking the person on the fish counter to fillet the fish for you.

Method
Prepare the grill for cooking direct on a high heat – 225° to 275°Celsius.

Brush the grates to make sure they are clean and grill the peppers over the direct heat with the lid of your BBQ closed until the skin has blackened and blistered – this should take about 10 to 15 minutes, turning occasionally to ensure all parts are blackened.

Remove the peppers from the BBQ gently and place in a bowl with some cling film over the top to capture the steam.

Set aside for at least 15 minutes and then peel away the charred skins. Cut off the tops and remove any seeds.

Cut the peppers in 1cm wide strips and set aside. Whisk together all the other vinaigrette ingredients in a medium bowl and finally add the pepper strips. Cover with cling film and set aside and refrigerate for up to a day.

Lightly brush the fillets with the olive oil and season with salt and pepper to taste.

Grill the fish over a direct heat with the lid down as much as possible until the skin is opaque in the centre (about 5 to 7 minutes), turning once carefully.

Serve warm with the vinaigrette spooned over the top of the fish. Great with just green salad and some potato wedges.