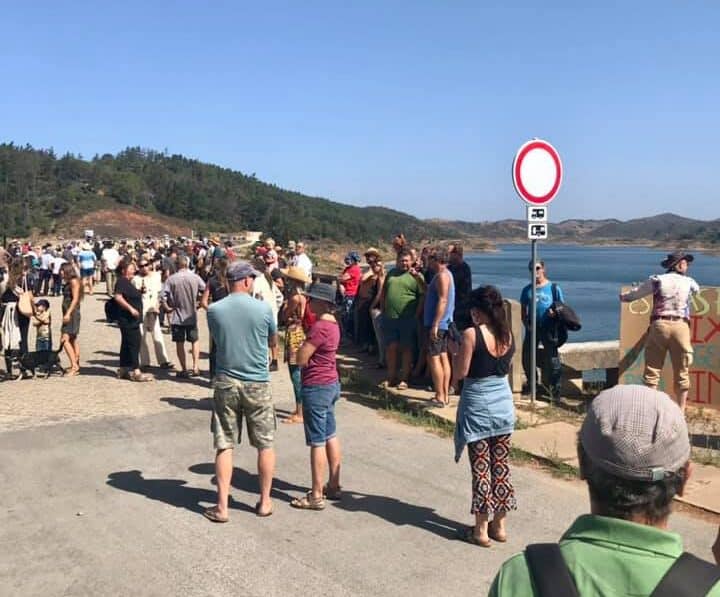 This morning at the normally quiet Alentejan beauty spot of Santa Clara Dam hundreds of people turned out in force to decry agro-industry’s monopoly on dwindling local water supplies.

For years, the government agency ‘managing’ water distribution from the dam – the Associação de Beneficiários do Mira (ABMira) – has been a thorn in the side of local populations within the municipalities of Odemira and Aljezur.

No matter how much people have tried to bring balance to a situation that now sees 90% of all water leaving the dam going to intensive agriculture owned by foreign berry growers, iniquities persist.

It has reached the stage where local people (previously conceded 6% of water pumped out at a rate of 1,000-litres per second) are finding themselves cut off from water supplies altogether.

“40% of the water pumped out – it’s now too low to flow as it should into the purpose-built canals – is lost through insufficient maintenance of the said canals, (i.e. they leak), or it flows, unused, through bad management, into the sea” he explains.

Frank has been reporting from the ‘front line’ for weeks now, tracking the relentless draining of a dam (click here) that has reached what is called ‘dead level’ (click here).

“It’s an environmental disaster”, he stresses, particularly “as the berry growers have already bulldozed out of existence rare and meant-to-be protected habitats for which Portugal received funds from the EU…

The same berry growers, “who have effectively taken over AB Mira, are domiciled abroad, mostly in the States and Holland through a blizzard of different companies which own other companies etc. etc., and have received massive tax rebates from the Portuguese government on the tax that they did pay here in 2019.

AB Mira “even cut off the flow into the original river until we raised a stink greater than that raised by the drying and dying river bed (click here).

“The whole thing is made infinitely worse by climate change which has led to a drier local habitat visible on a daily basis,” Frank continues.

Adding to the nightmare is the fact that the berry growers “employ few locals”. Their workforce is made up almost entirely of around “16,000 poorly paid Nepalese, Pakistani and Indian semi-slaves”.

These are the same people whose parlous living conditions caused such drama in the Spring with outreaks of Covid-19 that have still to be properly brought under control (click here).

For businesses, the area’s high Covid ratio “shut down the majority of the local tourist industry for the better part of the last six months, materially affecting the livelihoods of the whole area”, continues Frank.

“It’s the Portuguese Ministry of Agriculture promoting the whole thing while the Environmental Agency wallies about strafing locals who raise a brick anywhere in the vicinity – meanwhile the berry growers have put 1,000 hectares of a Natural Park under plastic, far more than they are permitted to do, so a “Natural Park” is now one in name only, disappearing under a sea of plastic while drinking at an ever-increasing rate the only water resource for the whole area”.

Pointing the finger squarely at government departments that ‘wally about’ Frank McClintock’s concerns have been the raison d’être of environmental group Juntos Pelo Sudoeste for longer than anyone cares to remember.

Today at least saw a protest of around 500 people that should put the issue back onto various news channels.

The ‘demands’ are essentially the same as they always have been:

Plus the restitution of water flow to the River Mira.

None of these demands are new. But the abysmally low level of water in Santa Clara dam has reached the point where central authorities will find it almost impossible continue their habit of passing the buck.