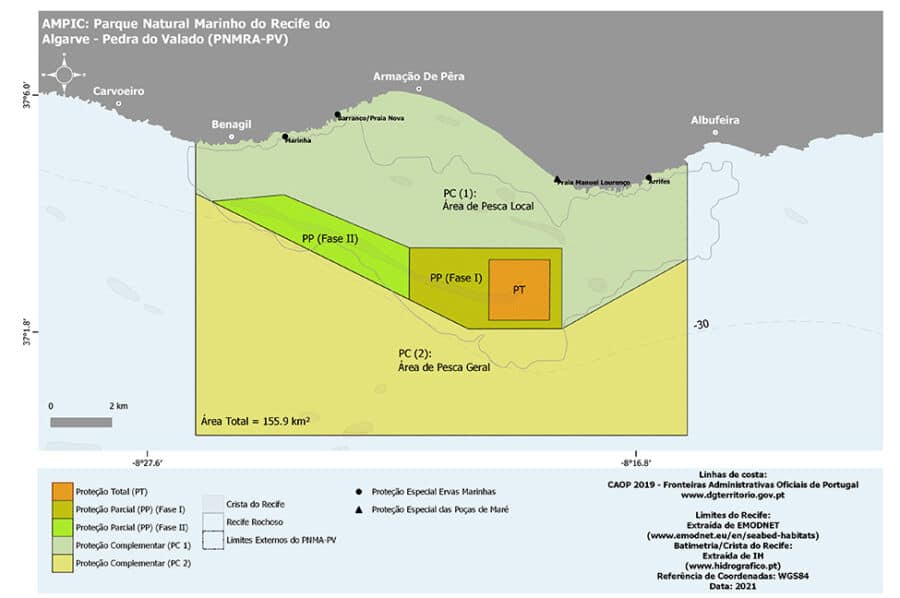 The reef runs close to the Algarve coastline from the Farol de Alfanzina in Lagoa to the Marina of Albufeira.

Of these species 19 are covered by a ‘statue of conservation’ (including , seahorses, and grouper fish); 45 exist only on this particular reef and 19 “are not known anywhere else in the world”.

It’s an underwater paradise, in other words, that has been left unprotected and hugely vulnerable to outside elements (including tourist boats).

The Armação de Pêra association of fishermen was the entity that first started this ball rolling.

It approached Ocean Blue in 2018 concerned over the reduction of fish that was affecting local and non-industrial fishing. The association told the foundation about the reef.

“From there we contacted CCMAR (the centre for sciences of the sea of the University of the Algarve) which already had studies on the area, and we realised we were dealing with an area very rich in terms of both biomass and biodiversity”, the foundation’s CEO Tiago Pitta e Cunha explains.

From there, Pitta e Cunha ordered a more thorough investigation of the area, which delighted CCMAR as it had been trying, without success, to win the reef some level of local protection.

But the issue was ‘complicated’ in that the area is ‘vital’ for fishermen and for tourism: traditional ‘protection’ classification could not work without putting livelihoods at risk.

Thus what has transpired is something totally new for Portugal: an AMPIC – Area of Marine Protection of Community Interest.

“Fishing associations, representatives of maritime touristic activities and similar, various companies, municipalities, schools, environmentalists, government departments: in all more than 70 entities took part in the definition of the first AMPIC in Portugal”, says Expresso. The idea being to find a way of conserving nature and meeting the immediate economic needs of the communities in the area.

The proposal to create the AMPIC was presented to the ministers of environment and sea last week – and the name chosen for it is “Parque Natural Marinho do Recife do Algarve – Pedra do Valado”.

Says Expresso, the total area covered involves 155.9 sq km off the coast of the municipalities of Lagoa, Silves and Albufeira.

There is to be one area of ‘total protection’: 4 sq km at the point of greatest biodiversity where the idea is to prohibit any activity – even the passage of boats.

Then there is a 16.5 sq km stretch along the crest of the reef considered for ‘partial protection’.

“Here fishing would be prohibited but activities like diving could take place, as well as the passage of boats/ boat trips”.

Finally there is an area for ‘complementary protection’, 135 sq km, where the project hopes that low intensity fishing can go ahead, within the reef’s interior, involving boats up to 9m; with coastal fishing boats being allowed on the ‘outside’ of the reef’.

Said Tiago Pitta e Cunha: “It has never been more urgent to protect the ocean and create tools for conservation” and since Portugal holds one of the largest exclusive economic zones in the European Union, it has “a duty to accompany issues involving the sustainability of the ocean as well as promoting their realisation. It could even have a fundamental role in leading these issues at international level”, he added.

“Marine protected areas, when properly designed and implemented produce more fish, larger fish and supper a greater diversity of species. In turn we can have a more valued economic activity with greater return for fishing, more sustainable, tourism, valuing territories, activities and products of the sea”

The next step is for legislation to be created – and this is expected to take up to three years.

What all those behind it are adamant is that the once the AMPIC is in place, authorities ensure all the rules are adhered to.

“This is fundamental”, said Pitta e Cunha. “Otherwise there will always be people who want to scrape the bottom of the barrel” – and in this case, the barrel is simply much too precious to be left at risk.