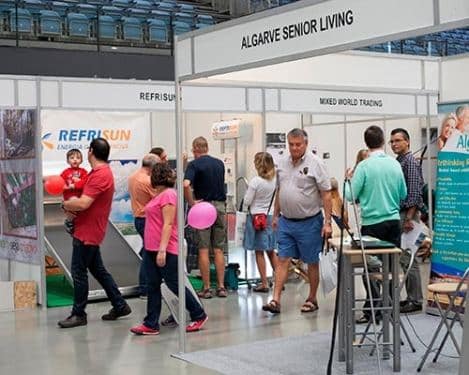 Dozens of residents of various nationalities were led by members of the Partido da Terra (MPT) political party in a protest against a planned tourist resort for the Praia Grande-Salgados area on Monday.

After meeting at a coffee shop near Lagoa dos Salgados at 2pm, the group of protestors of all ages then moved to the track leading to Praia Grande to voice their concerns to members of the local and national press and raise awareness among visitors to the site of what is at stake – the loss of a birding sanctuary and natural lagoon as well as the vast unspoilt area to the west.

The Algarve Resident witnessed protestors holding posters saying ‘Save Salgados’, stopping holidaymakers who were en route to Praia Grande to raise awareness of a 247-hectare project being developed by the Galilei Group and its Algarve subsidiary Finalgarve, with the backing of the Silves Mayor.

From the surprised look on the faces of holidaymakers enjoying the beauty of the unprotected site, it was clear few knew about the impending threats to the area.

The protest was led by the president of Partido da Terra, John Rosas Baker, who travelled from Lisbon to show his support of the fight against the plans that threaten to be the final nail in the coffin for Lagoa dos Salgados, which stands between the densely urbanised Armação de Pêra to the west and the ill-fated CS Salgados development to the east.

John Rosas Baker told the Algarve Resident: “I have visited this site since I was five years old as my family has a house in Sesmarias (Albufeira). I can assure you I will fight to protect Lagoa dos Salgados and its surrounding areas until the end.”

He continued: “Until the area is classified as an ecological reserve, it will always be a victim of the greed of developers.”

The approved project for the area includes the construction of three hotels, five holiday villages, shopping complexes and an 18-hole golf course.

Algarve resident Frank McClintock, one of the strongest voices against the Praia Grande project, was present at the protest and encouraged everyone to sign the online petition he created only two months ago and which already has nearly 12,000 signatures.

He said: “I am delighted to know that so many locals want to defend the lagoon and have already signed the petition.”

Currently, some of the species of birds that can be found at the site include Grebes, Gulls, Little Terns, Coots, Flamingos, the rare Purple Gallinule, Black Terns, Peregrines, Black Winged Kites, and Collared Pratincoles, amongst many other wild life species. “All of which will lose their homes or be killed due to the development,” said Frank McClintock, a keen birdwatcher.

Questioned about how the petition can be used in favour of the ‘Save Salgados’ cause, José Inácio Faria from MPT said: “Although our party does not have a seat in parliament, we have a good relationship with members of the PSD and CDS parties. The overwhelming response to the petition will be used to put pressure on MPs for the case to be discussed in parliament.”

He said mechanisms to formalise their opposition to the development existed and are currently being worked on in order to obtain a reaction from the government.

He referred to a statement made by Isabel Soares, in which she said that the development would enhance rather than damage the environmental beauty of the area and also create many new jobs (read Algarve Resident, July 13 edition).

“If the idea is to create jobs, then there are other ways of achieving this, like promoting the area to nature and wildlife lovers,” said Alexandre de Almeida of MPT, adding that this would lead to interest in Praia Grande and local businesses would benefit.

Paulo Dias had no doubt that people would continue to visit the Algarve for the same reasons that they did 50 years ago – the sun, the beach and to relax. “There are no improvements to be made when nature is being destroyed,” he said, adding that the Silves Mayor is only concerned about property tax (IMI) money.

Local Portuguese resident Maria Clemente said she had heard about the protest that morning and could not miss the opportunity to show her anger at yet another attempt to destroy the Algarve.

Pointing to the CS Salgados resort as an example of what the new project would become, she said: “That part of Salgados is already destroyed. It was luxury but now stands empty. Now they want to do the same here. Where else can we enjoy such natural beauty? We will be running out of options soon.”

Rosie Peddle, who writes the Gardening column for the Algarve Resident, was also showing her support for the lagoon. “They (developers and Silves Mayor) have no heart to be broken and no soul to be damned. This is pure gold here. If Portugal throws this away, they are nuts.”

MPT members, confident that they will be able to halt plans for Praia Grande, have vowed not to give up on the natural sanctuary and the people who have been working tirelessly to keep the area untouched.

With building work of the urbanity expected to begin at the start of 2013, it is time to take real action.