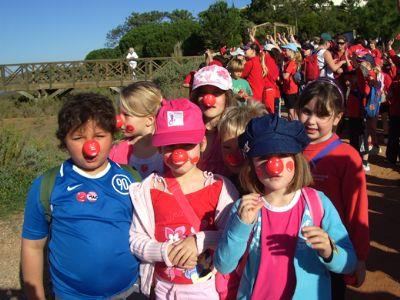 Staff and students of the International School of São Lourenço raised more than 1,000 euros for UK charity Comic Relief by doing something funny for money on March 13.

Wearing their red noses and dressed in red tops, the staff and students congregated on the school playing field to dance the Macarena.

A total of 1,021.25 euros was raised for Comic Relief from the sale of the red noses that were donated by the PTA, as well as from the dance.

On the same day, the school united for a sponsored walk in the Ria Formosa natural park as part of a healthy activity day organised by the PTA and the sports department, which raised funds for the school.

A spokesman from São Lourenço school told the Algarve Resident: “We raised lots of money for new playground and sports equipment for the school. We are still collecting the money in, so don’t yet have a figure for how much was raised.”