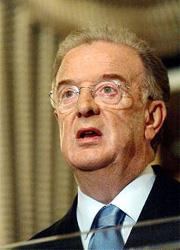 THE LAST week in office of outgoing President of the Republic, Jorge Sampaio, was marked by three events: his official leave of the Portuguese Armed Forces, a lunch with political party leaders and the presentation of six journalists with decorations for their services.

According to surveys, Sampaio’s 10 years in Palácio de Belém were an overall success. However, the Portuguese gave the President an average 13.5 points out of 20, concluded statistical and survey company Aximage. Not one person asked in the survey gave the President a negative mark, although supporters of far right wing party CDU were the least to appreciate the President’s performance, giving him 10.5 points. In complete contrast, the PS party (governing socialists) were the most enthusiastic, awarding the President 14.5 points, while far left groups such as Bloco de Esquerda gave him 12.8 points and liberal conservative PSD 12.8 points.

Jorge Sampaio can certainly be credited as being the most visible President in Portuguese history, having toured all 18 districts in the country to hear complaints, receive petitions and exercise his influence in resolving problems that resulted from successive governments.

Winning his first mandate in January 1996 against Cavaco Silva and his second term in January 2001, he will be most remembered for his tireless efforts in fighting for East Timor’s independence and the smooth handing over of Portugal’s last colonial presence Macao to China in 2000.

On the domestic front, his style was marked by prudence and moderation. However, his aims at providing a stable rudder for the Portuguese State through choppy economic seas were not always successful. His refusal to hold a general election when PSD Prime Minister José Manuel Durão Barroso resigned in 2004 to head the European Union Commission led to a crisis and widespread left wing criticism, which culminated in the destabilisation of his own PS party and the sacking of new PSD Prime Minister and former Lisbon Câmara President, Pedro Santana Lopes.

The crisis resulted in the stepping down of PS oppositional leader Ferro Rodrigues and the dismissal of Santana Lopes in November 2004 after only four months in government, as Portugal veered ever closer to political catastrophe and economic recession.

Sampaio said he took the initial measures to ensure political stability, but ended up with the exact opposite. He was forced to dissolve parliament and call elections in February 2005, after a crisis in confidence in Santana Lopes’ government paving the way for the PS election victory of José Sócrates.

The President was a firm supporter of raising educational standards in Portugal, improving access to schooling in rural communities, and encouraging innovation and competition wherever he went. He was also a tireless globetrotter, representing the Portuguese State in most countries in Europe, Latin and North America.

During his time in Belém, Jorge Sampaio visited 11 kindergartens, 30 primary schools, 27 secondary schools, 25 polytechnics and 43 universities. He called in on 61 social institutions, 13 health centres, 27 hospitals and more than 100 companies.

The President was born in September 1939 into a medical family that lived in both the UK and the US. Sampaio started his political career as a law student at Lisbon University and, as an opponent of the Salazar regime, defended many political prisoners.

After the April 25 Revolution in 1974, he founded the short-lived MES Party (Social Left Movement), joined the PS party in 1978, became a parliamentary deputy in 1979 and Mayor of Lisbon twice between 1989 and 1993. Chris Graeme