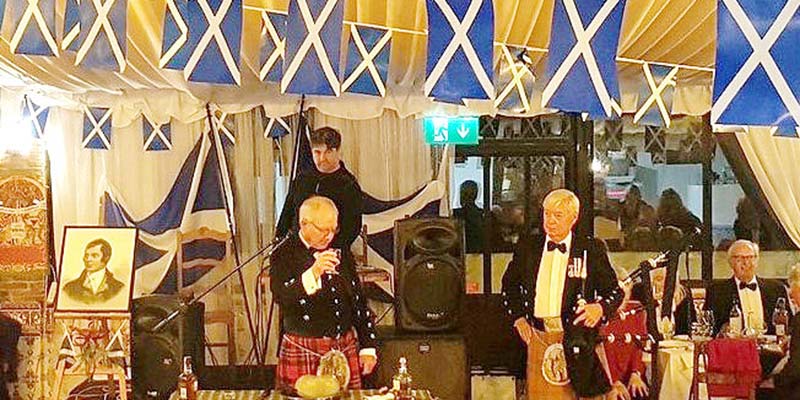 The Saint Andrew’s Society of the Algarve held its Burns Supper at the Ponte Romana restaurant in Silves on Saturday, January 26. The Supper was a “resounding success” with over 130 participants.

As usual, bagpiper Malcolm MacGillivray got the evening off to a scintillating start by welcoming guests into the restaurant. Guests enjoyed a glass or two of bubbly arranged by Joaquim Tinoco of Catuna & Silva.

The restaurant, which has had a very welcome makeover, has been used for this event for many years and is now well practised in preparing and serving the traditional Macsween haggis, tatties and neeps. I (fairly theatrically) addressed the haggis after it had been piped in and a dram offered to the piper and accompanying “kilties”. We were very grateful to Blevins Franks who sponsored not only the whisky but also two tables for the evening.

After the main speech – the Immortal Memory of Robert Burns by John Hope – the light-hearted and teasing Toast to the Lassies was made by Raoul Martinez and the more-than-adequate response on behalf of the lassies was made by Allison Hohnbaum!

The assembled company then partook of lively and enthusiastic Scottish dancing, which included an Eightsome Reel piped heartily by Malcolm MacGillivray, and the proceedings were brought to a close just after midnight with ‘Auld Lang Syne’.

Anyone interested in knowing more about the Society is welcome to ring me on 935 577362 or Kathy Prentice on 919 635246. Our Society is small and comprises many nationalities so no need to be Scots! And if you would like to give Scottish dancing a try (again, no need to be Scots), why not speak to Mardie Cunningham? She introduced all the dances at the Supper and runs the dancing at the Nobel International School in Porches on Monday evenings from 7.30pm to 9.30pm (call her on 282 356 029).

Make a note in your diaries that our next event will be the Saint Andrew’s Ball at the Hotel Penina (near Portimão): it will actually be on Saint Andrew’s Day, Saturday, November 30.