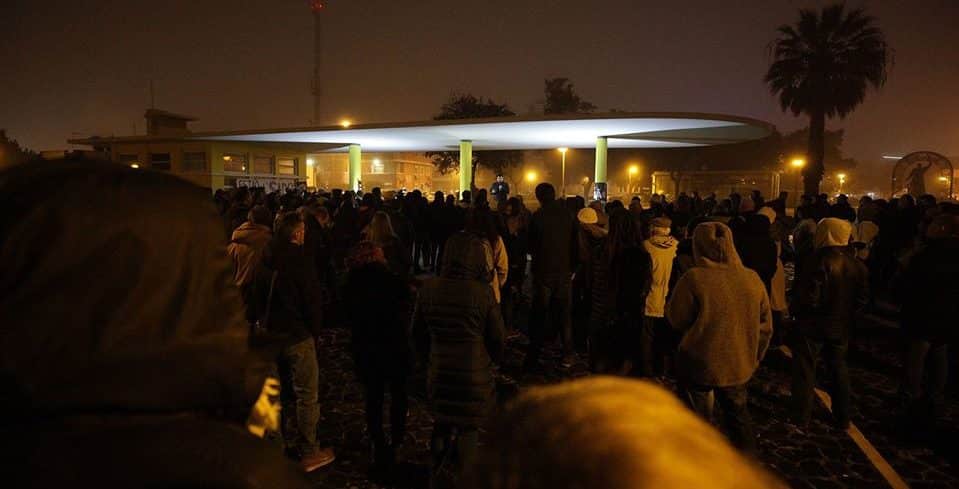 Late on Thursday evening – long after darkness had fallen – the ‘unthinkable’ for so many campaigners began: a dredger working for Setúbal ports authority began scooping up the first of millions of cubic metres of sand in a controversial project designed to create easy access into the signature river for large boats.

As pressure group SOS Sado explains: “In a true portrayal” of how this damaging project has been pushed through, the dredger “began working under cover of night and in bad weather” – tackling sands in the Northern Channel and not the area cited by ports chiefs earlier in the week.

The change of location – dubbed by SOS Sado as “another pearl of disinformation that we’re now used to” – involved a GNR boat-patrol to ensure no protestors were able to get close enough to start filming.

Today, the dredger is still working – despite the fact that an embargo presented to the courts has not yet been decided. The idea is for sand-scooping work to continue 24/7 until May 2020, explains Público.

On Thursday, the initiative will come under discussion in parliament with left-wing parties supporting local people in the battle to ‘get the dredging stopped’ and save the fauna and flora of this beautiful estuary (click here).

Meantime, Setúbal native and biologist Raquel Gaspar has gone public with an appeal to ‘all Portuguese’ to step in and help.

“We cannot let this estuary be destroyed. It is one of the most beautiful and most symbolic in terms of wildlife in our country”, she said.

As she was speaking, some of the estuary’s bottle-nosed dolphins approached the dredger that was spewing mud up from the depths.

“These dolphins are here for a reason”, Gaspar told reporters. “They need our voice, my voice, the voice of all Portuguese people.

“On December 19 (Thursday), parliament will be voting on a proposal recommending the government stops dredging work forthwith. I ask everyone in this country, ‘don’t turn your backs on this problem’.

With a new petition busy gathering signatures over social media (click here), SOS Sado writes that it ‘will not rest’ till it wins this fight.

The truth however is that last Thursday was a “tragic day in the history of the Sado, of Setúbal and for civic participation” – bearing in mind thousands have already signed petitions, marched in the streets and held vigils outside Setúbal Câmara to try and save the estuary from interventions that even environment agency APA agrees will have ‘irreversible effects’ on the location’s biodiversity.

The rallying call this weekend is “in the courts, in the streets, in Parliament on 19th, let them hear: “Yes to (life in the) Sado!”

Photo taken from SOS Sado Facebook page, depicting one of the vigils at Setúbal port