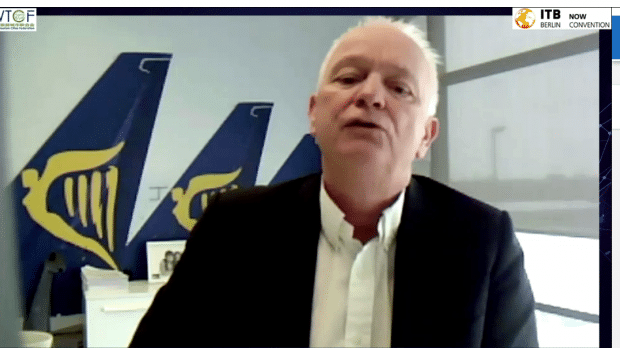 Low-cost airline Ryanair is on the warpath over governments’ support for national airlines.

TAP, Lufthansa, Air France – they have all benefited from millions if not billions of euros to tide them through the pandemic while Ryanair ‘has been left out in the cold’.

Talking to Público, he criticised the roughly €3 billion forecast for the airline (click here) – when Portugal is a country with less than 11 million people “and alternatives exist.”

TAP will never be able to pay the money back – meaning Portuguese taxpayers will never see a return for the money spent, he said. “It’s bizarre when you receive State aid just because of what is painted on the outside of the plane”.

Wilson believes State support should be equal, and for all companies within the sector.

“We and other airlines transform the Algarve – and if we don’t receive a penny from the Portuguese government why should another airline be any different? It’s bizarre, anti-European and anti-competition”.

It’s not that Ryanair wants money “just because someone else has received it”, said the CEO. “What we are saying is that if there is a pandemic and the whole sector needs to recover, the emphasis should be on recovery.

“In the air transportation sector this recovery will be measured in the number of passengers transported, for example, to Portugal benefiting the economy, helping to create employment, assuring connectivity and supporting tourism”.

Ryanair has recently lost two legal bids against State aid to French and Swedish airlines but says it will be appealing the decisions. It is also pursuing other cases, including trying to annul the €1.2 billion bailout agreed by the Portuguese government for TAP.