Sue’s Roadrunners and British Overseas Supermarket (formerly Iceland) have raised €1,214 for the Algarve Oncology Association by running 12 kilometres for the MamaMaratona event.

The official dates for the fundraising event were between October 10 and 30, but the group wanted their effort to coincide with the 10th anniversary of the opening of the Albufeira store and to include a runner arriving from the UK.

Donations have been received by customers using the supermarket and, of course, the runners themselves, plus friends and relatives.

Emma Fisher, manager of the Albufeira store had never previously run and trained specifically for the event. Up to the run day, her previous longest run had been 10kms. She said she would have struggled to complete the final 2kms without the support of the runners and was over the moon with her achievement. 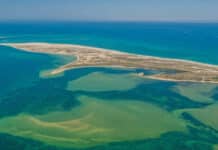 Researchers release thousands of seabreams in the Ria Formosa