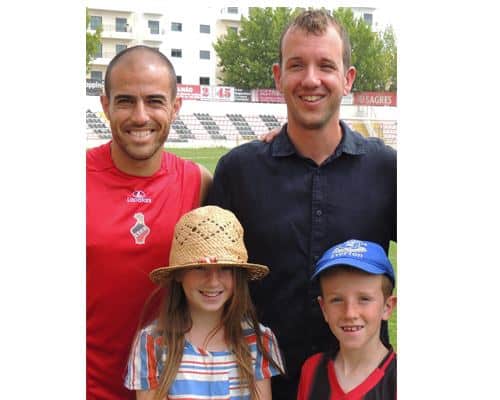 The player who captained Olhanense when they were promoted to the Primeira Liga in 2009 has left the club by mutual consent.
Rui Duarte, 36, was passionate about his football and was a great motivator who led his team by example. He had signed a new one-year deal in mid-August and played in seven games this campaign.
Rui Duarte will be long remembered for his strong bond with fans and willingness to engage in community based activities. The remarks of new manager Jorge Paixão and the disastrous performance of the team against Oriental in the Portugal Cup made it apparent that there would be changes in the playing personnel.
Rui Duarte could be the first of a number of changes as the club endeavours to extricate itself from the lower reaches of the Second Division. C.W.
Photo: Rui Duarte with the Balshaw family from Lancashire