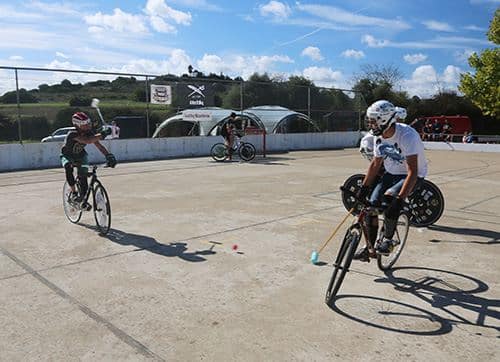 Our community does know how to throw the perfect Royal bash! Here is a selection of photographs taken at several parties held in the Algarve to celebrate the wedding of Prince William and Kate Middleton.

Algarve resident David Thomas (pictured far right) and his wife Jane hosted a very British day of fun and games at their home in Alfontes near Loulé.

The theme was red, white and blue and the 25 guests dressed accordingly while the house had been decorated in patriotic balloons and bunting.

An archery contest, croquette match and orange and spoon competition (below) were all part of the proceedings with each member of the party taking on a specific role and Jane Whitehead, who had been nominated as the Queen for the day, judging the bowing and curtsey competition.

Davis Thomas said: “Like the royal wedding itself, it certainly was a day to remember.”

Members of the British community from across Portugal were invited to watch a special screening of the royal wedding at the residence of British Ambassador Joanna Kuenssberg O’Sullivan in Lisbon.

A spokesman for the Embassy said: “I think all of the members of the British community who attended really enjoyed themselves and luckily it only started to rain after the event was over.”

Hats on  for ACCA

Guests at the ACCA charity royal wedding party, held at Paixa restaurant in Vale do Lobo, raised €3,875 for the Algarve children’s charity.

Entertainment was provided by Martin Teutscher on the saxophone while champagne and canapés were followed by a tapas lunch and wines.

Liz Healy (pictured left) was the winner of the prize for best hat on the day while other guests including Beverly Mitchell and Mora Alston (pictured above) were able to pose for photos with the royal couple, or at least a cardboard cut out of the pair, to raise more cash for ACCA.

Jackie Quirk from ACCA, pictured above right (on the left) with Anne O’Connell, said: “Everyone looked wonderful and made a huge effort for the wedding, especially the five gentlemen who managed to cope with the 65 ladies on the day!”

Fancy hats, fascinators and glamorous dresses were the order of the day for the royal wedding revellers who came together at Phoenix Nites in Monte Carvoeiro for a buffet lunch prepared by Tim Goodfellow and his team.

Party guest Valerie Callaghan said: “We had a great time, the dresses and the headwear were fabulous and a memorable day was had by all.”

Residents and visitors of all nationalities at Oasis Parque in Alvor held a traditional street party to mark the day with bunting, balloons and flags all adding to the atmosphere.

Many local residents decided to throw their own private parties, including Belgian residents Gust and Monique Hens who invited friends to watch the royal wedding while enjoying a breakfast fit for a king at their home in Carvoeiro.

Guests attending the Pestana royal wedding celebrations were able to take part in a Casino Royale themed evening, with all members of the family able to try their luck on the roulette wheel.

James Harrison from Pestana said: “The clubhouse was packed for the event with the special lunch, including coronation chicken, being fully booked and all nationalities took part in what turned out to be a great day.”