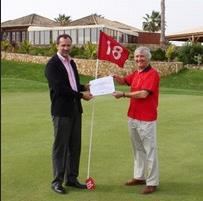 THE ROTARY Club of Silves celebrated its 13th Charter Night last week and announced a number of innovative projects for the next Rotary year.

Speaker at the Charter dinner was Albufeira President, Rui Manuel Carvalho, who was thanked by Rotarian Past President Hélio Cartaxo. Incoming President, Isabel Flores, who takes over in June, has recently flown to Boston, US, as the Team Leader of a delegation of six, as part of the International Group Exchange scheme. Students from many European countries will attend the high profile event, which includes visits to the Rotary District Conference, Harvard University and the John F. Kennedy Memorial.

Meanwhile, plans are progressing well for the Club’s annual Jazz Spectacular (April 29), with ticket sales exceeding expectations and donations for the auction taking on new dimensions. The latest contribution of two vouchers, valued at a total of over 400 euros, for two individuals to play an 18 hole round each with the use of a buggy, is from the management of Pestana Golf Resorts in Carvoeiro, who are hosting the glittering event in their new clubhouse at Vale da Pinta. To ensure your place at the Jazz Spectacular, call 282 381 508

One of the Club’s major projects for the new Rotary year is to help raise awareness about the importance of donating blood in the Algarve with a sequence of initiatives beginning with a Rotary Blood Donors Day in July at Portimão Hospital.

Local schools are to be involved in helping design a new poster to enlist blood donors and Silves will be harnessing all the other Algarvean Rotary Clubs to boast donations. The aim is to increase donations by 25 per cent in 2006/7. Meetings with the Director of Portimão’s Haematology Centre later this month will finalise details and seek sponsors for the new merchandising material.