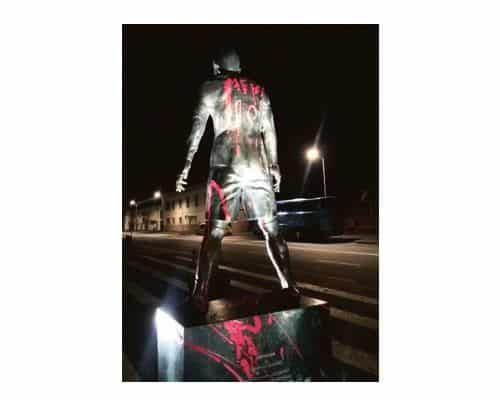 Hot-on-the-heels of news that Madeira’s legendary footballer Cristiano Ronaldo has “lost out” to Argentine player Lionel Messi in this year’s Ballon d’Or awards, his statue in Funchal has been “vandalised”, reports Diário de Notícias.

The replica of Portugal’s most famous player – already well-known for its somewhat larger than life effects in the trunk region – has been daubed with red paint, with the name “Messi” and the number 10 splashed across the shirt area.

The attack must have happened on Monday night, reports the paper, hours after the announcement made in Zurich (see story elsewhere).

As the statue is now being cleaned, Ronaldo’s sister Kátia Aveiro has condemned the attack on social media as “shameful”, saying the worst of it is that it shows the “envy” that surrounds her brother.

Other comments over Twitter claimed it was thanks to CR7 that “many people in Madeira still have a job”, and that instead of hurling paint people should be saluting him.