Everyone knows the old saying “all roads lead to Rome”. However, when in Rome, you soon learn that all roads lead to old city squares filled with monuments, classical sculptures and majestic fountains.

One of the most famous squares in Rome is Piazza Navona and, if all roads lead to Rome, then they definitely all lead to this square as there are over 10 entrances that lead in to the Piazza.

The square has a long, rounded, rectangular shape as it used to be the location of the Domitian Stadium, Rome’s very first permanent venue for athletic competitions. The Domitian Stadium, named after the Roman emperor who commissioned it, was a gift to the people of the city and hosted sports practised by the ancient Greeks, which Domitian admired. The emperor wanted to inspire the Romans to practise more athletics, and the sports practised at the stadium included racing, wrestling, boxing, pankration (a combination of both wrestling and boxing), and pentathlons.

Although the stadium was built for the people of Rome, its citizens considered most of the sports to be “unmanly” and preferred the grand spectacle and violence of the colosseum. One of the main differences between the two was that gladiators were part of the lowest social class (most of them were slaves), whilst the athletes that competed at the stadium were generally Greeks and other professionals. However, ordinary people were also allowed to compete in order to achieve higher social status, money, Roman citizenship and other honours.

Throughout the years, after the fall of the Roman Empire, parts of the stadium were looted and repurposed to build other city monuments and eventually houses were built where the stands used to be. It was then, during the 15th century, that the area where the stadium’s field used to be was transformed into a square and was used to host the city market and other gatherings. However, the remains of the stadium can still be found and visited today, in galleries located under the current buildings.

During the 16th century, Pope Gregory XIII was the first to erect fountains in the square. Every summer, during August, the drains of the fountains were purposely blocked to flood the area and create the Lake of Piazza Navona. This was to help combat the summer heat and the locals would flock to the square to bathe and watch re-enactments of famous naval battles and take part in water sports. This practice continued long into the 19th century until it was suspended by the reigning Pope.

In addition to all these changes over the centuries, the biggest contributor to the square, as we know it today, was Pope Innocent X, during his rule in the 17th century. Most of his contributions were probably mainly due to the fact that his family home, or should I say palace, overlooked the square.

The Pope renovated his family palace, commissioned the construction of the church of Saint Agnes, restored the two existing fountains (Fountain of the Moor and Fountain of Neptune) that sit at either end of the square, and finally held a contest for a grand fountain to be erected in the middle of the Piazza.

The winning design was by the prized Italian architect and sculptor Bernini, whose works of art can be found all over Rome. Originally, Bernini was barred from participating in the competition as he had worked closely with the previous Pope – who belonged to the rival family of Pope Innocent X. However, he was persuaded to create a design anyway and thus created a miniature silver model of the fountain – the Fountain of the Four Rivers. The silver design was secretly placed inside the Pope’s palace whereupon he instantly fell in love with the design and had the full-scale model built.

The fountain showcases giant sculptures of river gods, representing the four major rivers of the known continents at the time, over which the Pope also had influence – the Nile (Africa), the Ganges (Asia), the Danube (Europe) and the Rio de la Plata (Americas). The design is also filled with metaphors and symbology which became increasingly popular during the Baroque period.
The Nile River god has his face covered as no one at the time knew where the river began. The Ganges River god is holding an oar representing the river’s navigability. The Danube River god is touching the Pope’s coat of arms as it is the closest river to Rome, and the Rio de la Plata River god sits on a pile of coins representing the riches that the colonies in the Americas provided.

There is also a legend that says that Bernini purposely positioned the Rio de la Plata god to be covering his face with his hand so that he didn’t have to look at the facade of the church of Saint Agnes, designed by his biggest rival – Borromini.

Finally, at the centre of the fountain stands a giant Egyptian obelisk which, interestingly enough, was originally built by Domitian himself for a temple which was dedicated to his family cult.

At the beginning of this year, I was confined in Italy for 10 days in a Covid Hotel. Whilst it wasn’t easy being confined to the same room for that long, it was all worth it to be able to visit the Piazza once more. Every time I’m in Rome, I make an effort to visit the square as it is one of my favourite places in the eternal city. Well, the square, and also the famed Italian restaurants that serve the best pizza, pasta and wine.

|| features@algarveresident.com
Jay recently graduated from the Faculty of Fine Artes in Lisbon. Jay’s interests are exploring new cultures through photography and the myths, legends and history that define them. 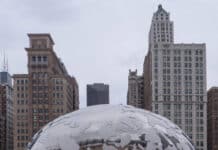 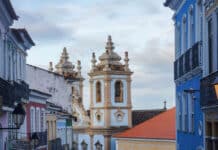 The first capital of Brazil