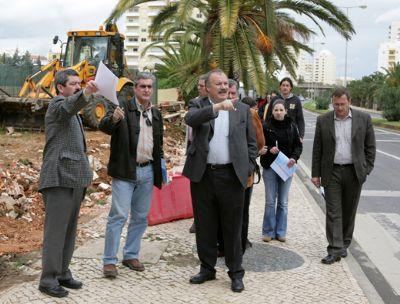 Portimão Câmara is to invest more than two million euros on improving the safety of the council’s road system this year, including the construction of new roundabouts, pedestrian crossings and road resurfacing.

A substantial amount of the work is currently being carried out and due to be completed by the summer, while the remainder will start at the end of the tourist season during the second half of September.

Work that is currently ongoing includes the renewal of the road surfaces in Barranco do Rodrigo, costing more than 76,000 euros as well as the construction of a roundabout along the V6 avenue and the resurfacing of Avenida São João de Deus and the surrounding area, costing more than 460,000 euros and due to be completed by June 30.

Four separate projects are also due to start this month and be completed by the summer, including the repaving of roads in Sesmarias and the road that links it to Vale das Hortas, costing more than 200,000 euros, as well as the construction of a pedestrian walkway through Portimão, representing an investment of more than 300,000 euros.

Roads will also be repaved in Malheiro and Mexilhoeira Grande this month.

Throughout 2009, other Câmara projects that are due to be completed include the refurbishment of the roads through Praia da Rocha, the repaving of the roads surrounding Alvor market and the renovation of roads within the town of Alvor, among others.

Portimão Câmara President, Manuel da Luz said that these road works will improve the safety of the council for all users.

“This investment will significantly improve accesses, facilitate the circulation of traffic and increase the road safety for drivers as well as pedestrians,” he said.