Guests were treated to energetic evening performances, cocktails and sunshine before Rita Ora took to the stage and dazzled the intimate crowd of local and international tastemakers with a special performance, wearing a sparkling jewel-encrusted mini dress.

Pre-performance, VIP guests relaxed at the socially charged Beauty Bar at AWAY® Spa with a cocktail in hand enjoying jet-set treatments from LED masks to mani-pedis and pre-dinner hair and makeup touch-ups.

The inauguration party started with a ribbon-cutting ceremony, which marked the official opening of the hotel. Festivities continued with a cocktail party and a sunset acrobat show before Rita Ora took the stage.

‘Anywhere’, ‘Let You Love Me’, ‘Ritual’, ‘For You’, ‘Your Song’ and ‘Body on Me’ were just some of the songs on the setlist during the hour-long show put on by the British star.

DJs Adam Porte and &Me brought the night to a close along with a show of 100 drones illuminating the Algarve skies by forming typically Portuguese images, such as the Portuguese flag, as well as a giant W representing the hotel’s name.

Making waves on the Algarve coast, W Algarve marks the debut of W Hotels in Portugal, giving sunseekers a new reason to visit the region. Perched atop southern Portugal’s iconic cliffs, the latest hotel to join the brand’s family of W Escapes brings a vibrant, unexpected new energy to the coastal town, offering a juxtaposed blend of seaside relaxation and social energy. 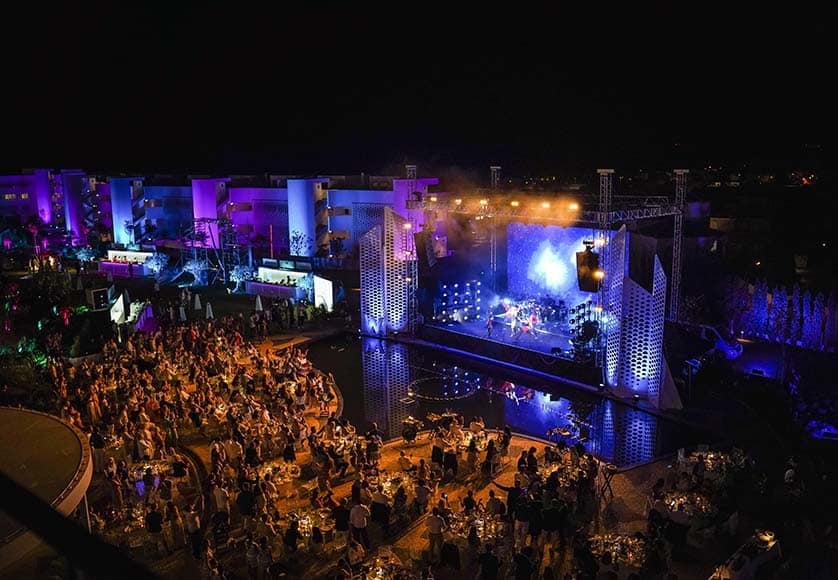 “Our aim with this new hotel is to bring a unique, modern luxury experience where international jet-setters and local tastemakers can discover an unexpected side of the destination,” she added.

Meanwhile, more top-notch entertainment is planned at W Algarve throughout the coming weeks.

The Wet Deck Summer Series will bring Portuguese DJ Chima Hiro to W Algarve on Saturday, July 30, between 3pm and 7pm, followed by DJ Rui Vargas on August 6, Seamus Haji on August 13 and Trikk on August 20.

To celebrate the opening of the hotel, W Algarve has a special offer for those who book at least a two-night stay, with breakfast and a 75$ credit to enjoy during the stay. In the case of Marriott Bonvoy members, the same offer stands but also include a bonus 3,000 Bonvoy points.

More information is available at https://www.marriott.com/offers/opening-offer-off-37987?propertycode=faowh