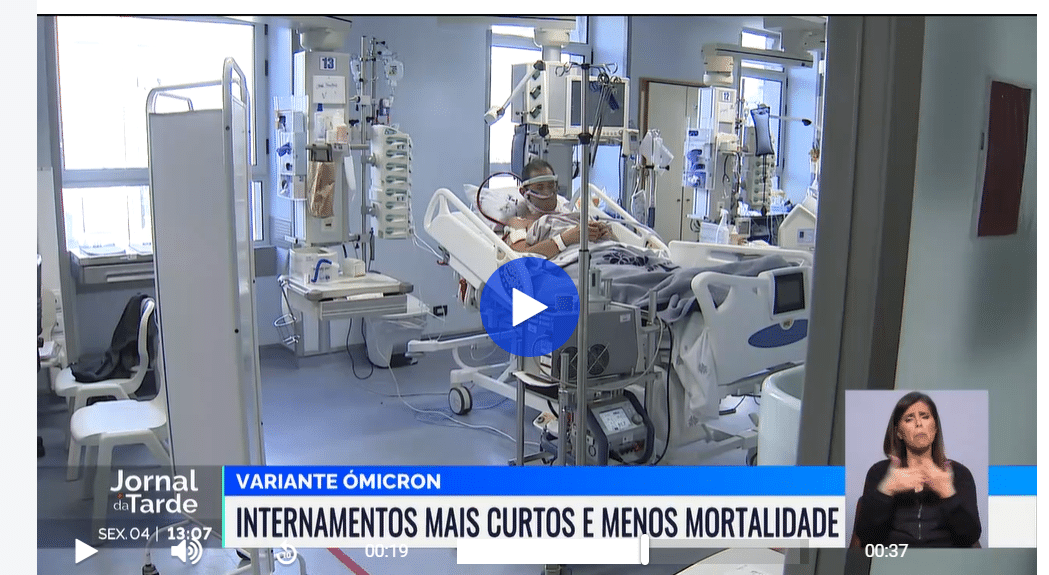 Over two months since this message was transmitted loud and clear from South Africa (where it was officially identified), the Omicron variant has finally been classified by Portugal’s DGS health authority as the least worrying variant of SARS-CoV-2 to date.

On a day when it is still trying to persuade parents to submit young children for vaccination against the virus, the DGS has admitted that the chances of anyone being seriously ill with Omicron are significantly reduced.

Hospital stays with Omicron are shorter, there is less risk of death than with previous strains. And the DGS admits anyone, independent of their age, sex, vaccine status or even previous history of SARS-CoV-2 infection, can get it.

This confirmation after so many sources elsewhere have been saying the same thing for weeks follows a study undertaken by the DGS itself in conjunction with INSA (the public health institute Dr Ricardo Jorge).

The study took place in December (when Omicron had already become well established as the principal strain of SARS-CoV-2 in circulation), and, the DGS admits, “shows conclusions similar to other studies that have been realised”.

But this is where instead of showing any inclination to ‘throttle back’ on messages of urgency, Portugal’s health manages to maintain them.

In spite of the results of the study, because Omicron “is associated with a greater capacity to partially escape the complete protection of the vaccination schedule and has a high degree of transmissibility, it has translated into a greater number of absolute cases, so even with reduced severity there may be a risk of overloading the health system”.

This comes after the usual round of experts has been constantly saying hospital admissions and numbers on Covid wards have been stable for some time now, and are very unlikely to change for the worse.

Why the DGS reticence to exude any positivity? ECO online suggests the answer: “Pfizer starts clinical trial for vaccine adapted to Omicron”.

The online adds: “Health authorities continue, in this way, to recommend the booster vaccination, regular testing as a way of maintaining the effects of the pandemic in the health system controlled”.

That these disjointed messages come out on the day authorities are trying to persuade people to vaccinate children over the age of five is all the more perplexing.

In a nutshell the messages run like this: ‘Omicron is mild (yes, we know you were told all this in November (click here), but we are only now prepared to accept it); Omicron is unlikely to lead people infected to becoming seriously ill –  if it does, they will very likely get over it relatively quickly in hospital; being fully vaccinated does not protect against infection; but you must vaccinate your children as this is still the best way forwards”.

As to the clinical trials for a vaccine adapted to Omicron, no mainstream news source has yet wondered out loud why anyone but the most vulnerable would need it. Yet, according to ECO, Pfizer’s trials are being conducted on an age group that is not associated with vulnerability – that of 18-55 year olds.

ECO completes the mystifying spin-cycle of information with the fact that “there is still not sufficient scientific data to gauge whether a 4th dose of vaccine against Covid-19, but adapted to the Omicron variant, will really be necessary”…