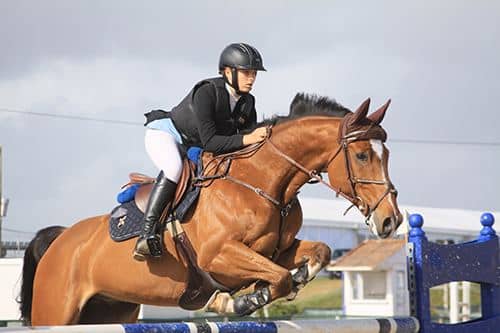 At just 15, Jessica Roskilly’s passion for horses and determination to succeed has shown her to be years ahead of her age.
Jess, as she is known to family and friends, is currently competing at the Vilamoura Champions Tour after having become the youngest rider ever to take part in Lisbon’s International Official Show Jumping competition earlier this year.
Born in England, Jess moved with her family to the Algarve in 2006 and has been riding since the age of three.
It was in 2010 that “her riding really started to take off”, her mother Sarah told us.
Jess had already entered various Algarve dressage and jumping competitions with her Dartmoor pony ‘Barny Rubble’, but once she realised that her real passion was jumping, her mother bought her her first horse.
In the same month, Jess passed her Sela IV exam and entered her first national jumping competition – facing heights of 1m.
From then on, Jess and her mother travelled all over Portugal, competing from Vilamoura to Barcelos, as well as Spain.
The youngster has been “progressing rapidly” through riding levels and classes, her mother tells us.
In June 2013, Jess was selected to be part of the Portugal Children’s Team for the European Championships and in January she moved to the junior category, where jumps go up to 1.40m – “a far cry from the 1.20m she had been jumping in the previous category”, said Sarah.
In May, Jess travelled to Ponte de Lima to jump the International Junior class, which was 1.30m first day, 1.35m the second day and 1.40m the final day. She won each category.
Eyes are now focused on what this young rising star can achieve at the Vilamoura Champions Tour.
The four-week championship, which features top international riders such as John Whitaker, Nick Skelton and Lorenzo de Luca, started on September 26 and will be running until October 18 at the new Otto Sport arena.
For details of the VCT schedule, consult: http://alubox.pt/
By MICHAEL BRUXO news@algarveresident.com