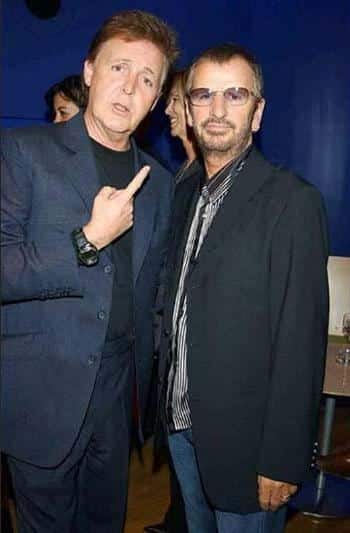 The remaining two Beatles, Paul McCartney and Ringo Starr, used A Little Help From My Friends to get by at a reunion of sorts at the David Lynch Foundation Transcendental Meditation benefit show on April 4 in New York.

The duo performed together at the show, which had seen earlier performances from big names such as Sheryl Crow, Ben Harper and Moby, in a three song finale.

This is the first time the Liverpudlians have performed together on stage since the November 2002 ‘Concert for George’ in London, a concert to mark the first anniversary of the death of George Harrison.

The sell out show in the Big Apple made many references to the trip made by the Beatles in 1968 to India where they went to meditate with Maharishi Mahesh Yogi and also showcased videos of students meditating nationwide.

The end of the show saw a standing ovation for the performance of I Saw Her Standing There by Paul and Ringo with a comedy moment at the very end as both Ringo and Paul vied for the centre stage spotlight.