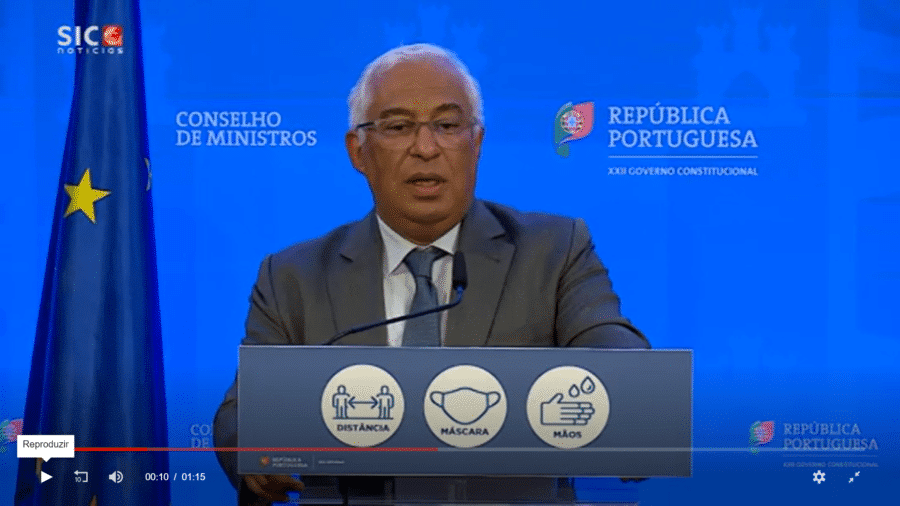 Restaurants in almost every corner of the country heard this evening that they will be able to function this weekend until 10.30pm.

After weeks in which weekends have been almost completely off-limits (and for many, totally off-limits) restaurants and cafés have been given the news they were waiting for. They can host up to six people at tables inside their premises from Saturday onwards, and 10 people per table on terraces.

As Portugal enters the 4th and final phase of deconfinement, frontiers with Spain will also finally ‘reopen’.

The country is nowhere near ‘normality’ but it’s a start.

Prime minister António Costa spoke to the country this evening, explaining that the minute the State of Emergency ends, Portugal will begin a State of Calamity in which “all of us have to avoid unnecessary contacts, so that the pandemic doesn’t run the risk of becoming worse”.

Of the 278 council municipalities, 270 have been deemed ‘ready to unlock’ in conformity with the government’s roadmap.

Eight however are still compromised with rates of ‘incidence’ that are far too high. Of these Miranda do Douro, Paredes, Valongo and Portimão in the Algarve remain at their current stage of deconfinement.

Aljezur, Resende and Carregal do Sal all have to take steps back to the point where cafés and restaurants can only function on their terraces.

But this time, re-evaluations of the situation are to come every week (not every 14 days).

In other words, the hiatus should be brief: numbers are improving all the time.

Odemira, which has suffered an acute outbreak of the virus among immigrant workers employed in agricultural explorations that involve hectares of greenhouses along the Costa Vicentina, is to have two ‘sanitary cordons’ round the worst affected parishes of São Teotónio and Longueira-Almograve, while the rest of the municipality advances to the final stage of deconfinement.

Elsewhere, 27 other boroughs with cases running above the 120 per 100,000 benchmark have been put on alert (see below).

In the Algarve, these alerts threaten Lagos and Vila Real de Santo António. If these boroughs’ numbers haven’t improved in one week’s time they may have to take a ‘step back’ to earlier stages of the deconfinement process.

Also in the Algarve, Albufeira – which had been ‘suspended’ in deconfinement stage two – has bunny-hopped to stage four with the majority of municipalities, its numbers now ‘back in line’.

Thus for the vast majority of the country, this new phase of reopening sees gyms free to hold group classes, outdoor cultural events with the green-light till 10.30pm and all shops and commercial centres able to operate until 9pm during the week and 7pm at weekends. Weddings and baptisms can now advance to a point where they run at ‘half capacity’.

The full list of boroughs put on alert by the prime minister is as follows:

Otherwise ‘what else is new’ (or what hasn’t changed): beaches this year will run as they did last year, with a traffic light system to show whether there is enough space to ensure correct physical distancing. Masks will be obligatory in public space until the end of the summer, and ‘teletrabalho’ (remote working) remains obligatory until the end of the year.

The details missing in tonight’s address is what is to become of bars and night clubs which have been closed for the last 14 months, their owners and staff in absolute despair…