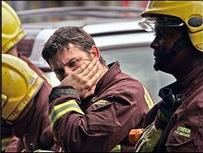 THE RECENT devastating fire at Buncefield oil depot, near Hemel Hempstead in Hertfordshire, UK, raised serious environmental concerns about air quality in the affected area. The blaze, which injured 43 people, has also opened debate about the wisdom of building such facilities close to residential areas.

Investigators said the fire still appeared to be accidental but they were looking into various causes, including a tanker driver who may have turned on his ignition switch after he smelled an odour at the depot.

It is hard to overstate the size of the inferno – emergency crews had to use 250,000 litres of foam concentration, 15 million litres of water, 30 kilometres of hose, 180 firefighters, 20 support vehicles and six high-pressure pumps to extinguish the fire. Such was the force of the blast that some people said they heard it as far away as the Netherlands and Belgium, around 270 kilometres away – although some experts have doubted such claims.

Following the fire, elevated levels of soot were recorded at air quality monitoring stations across southern England and a pall of black smoke hung over nearby London. Authorities despatched a specially adapted research plane, normally used to investigate climate change, to track the cloud. In spite of health concerns, Dr Jane Halpin, the director of public health at the Hertfordshire and Bedfordshire Strategic Health Authority, declared that samples taken the day after the blaze had proved “very reassuring”. Halpin added that tests for asbestos in the smoke were “clear and negative” and that consultations with doctors and hospital staff had revealed no significant increase in people reporting breathing problems.

But some residents were not appeased by assurances from experts. Sheila Chauhan, 31, who lives in the Leverstock Green estate on the other side of the industrial estate, disputed the findings. “There should be more coverage about the effect on the environment. You can still smell the fumes on my furniture at home and I’m also worried about the short-term and long-term effects,” she said.

Perhaps the most controversial issue in the aftermath of the fire has centred around planning laws that allow construction so close to such oil depots in the first place. Insurers have calculated that the damage to surrounding businesses could run into millions of pounds. Mike Penning, Conservative MP for Hemel Hempstead, has estimated that 60 major commercial buildings would be demolished because they are now structurally unsound and that another 150 had suffered superficial damage. Furthermore, homeowners near such sites are now likely to see depreciation in the value of their properties as fearful buyers reconsider purchases.

The fire broke out early in the hours of Sunday morning, December 11, a time when surrounding offices were empty. But Penning argues that thousands of people could have been injured or killed if the blast had occurred during the week. “If it had gone off at 10 o’clock on a Monday morning, there would have been 30,000 people inside the blast zone. I think this major national disaster will mean the need for a fundamental change in planning laws, which allow these sorts of depots so close to commercial and residential properties,” he said.

Any plan to build a site handling hazardous substances above a level specified by the government requires consent from the local authority. But, before it makes its decision, the authority must seek advice from the Health and Safety Executive (HSE) and the Environment Agency about residual risks associated with the proposal. The HSE’s role is purely advisory – the final decision rests with the authority.

The HSE acknowledges that for authorities facing such planning decisions, safety is just one of the elements to be considered. “There are few locations where new hazardous installations can be shoehorned into place without creating some risk to an existing community,” says the HSE. “The UK is a small, densely populated island and such undeveloped areas as do exist are often so remote or of such environmental value as to be unsuitable for industrial use.”

But, until there is a change in planning stipulations, residents near sites such as Buncefield are unlikely to sleep quite so soundly again.