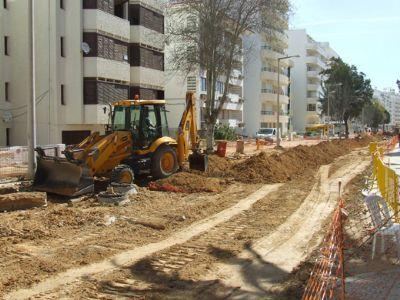 Despite months of road closures and diversions, destruction and dirt, residents and business owners in Armação de Pêra are looking beyond the unsightly redevelopment works and to a brighter future in the town later this year.

“I’m quite happy about the road works,” said Charlie Geering from The Water Dog pub, along the beachfront in Armação. “We have lost business, but you’ve got to take the bad with the good and once the work is finished, it’ll be very positive for the area.”

A spokesman from the Hotel Garbe, which is located close to the works, told the Algarve Resident: “It’s going to look beautiful and will enhance the most beautiful beach in the Algarve. The work is progressing quite quickly and we do advise our guests about the current state of the town.”

Ana Westwood, a local British artist who lives in Armação de Pêra, said: “We’ve just had visitors and it was a real shame for them because the beachfront doesn’t look great.” She added however, that as a resident, she “couldn’t think of a better solution” for the town and believes it will be a real boost to the area once finished.

Silves Câmara President, Isabel Soares, told the Algarve Resident: “The work is expected to be completed in July, because the term for the project was set as nine months.”

She added that the works will allow the improvement of traffic flow in Armação de Pêra, guaranteeing greater road safety and more appealing public areas.

“We are looking to implement measures that promote the environmental sustainability of this urban area, such as cycling, walking and other alternative means of transport,” she said.

The modernisation of the beachfront includes more green areas, an esplanade and a new coffee shop on the beach, which has caused some dissatisfaction among business owners who believe it will ruin the view of the sea.

The replacement of the sewerage and water supply systems, the enlargement of the pedestrian areas between the Hotel Garbe and the fishing dockside are also included in the redevelopment plans.