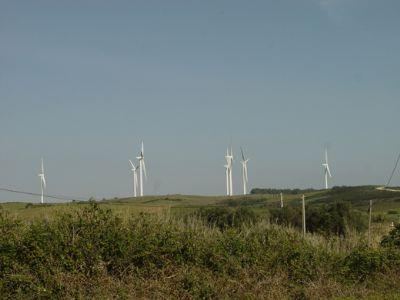 British residents in Tavira council are up in arms over a project to erect wind turbines and high tension power lines in what they call “a peaceful countryside haven”.

Tavira’s highest points have been earmarked to take wind turbines as part of a green energy project that will provide power to around 30,000 residents.

This project includes 29 turbines that will be distributed in five clusters along an eight-kilometre stretch in the Malhanito area of Cachopo parish council.

A total of 70 million euros is being invested in this project, which is part of the government’s plans to achieve the renewable energy quotas set out in the Kyoto Protocol and will supply around 7.5 per cent of the Algarve’s energy requirements.

A 60KV power line is also to be erected along 8.4 kilometres to transport the electrical energy generated by the wind turbines to the Tavira substation.

An environmental impact study is currently being carried out for this project, whose public consultation period was due to end yesterday (Thursday).

British resident Keith Boak, who moved to the parish of Santa Catarina in Tavira from Oxford in the UK around five years ago, told the Algarve Resident: “I found out in February about plans to build a wind turbine just 300 metres from my house when an engineer from the Porto-based company Cavalum arrived to erect a huge mast to measure wind speed.”

As a result of this project, local residents set up an association and have had meetings with Tavira Câmara officials to discuss whether the wind turbines could be moved to a different location.

“It’s very frustrating.  I thought when I moved here that bush fires would be the biggest threat, but it turns out to be infrastructures,” said Keith Boak.

Local estate agent Elizabeth Harding said: “I stepped in to help my customers because these projects will mean that the value of their properties will go down.”

Together with the support of local residents, Elizabeth has spoken to Câmara officials and written letters to the government to complain about the negative effects of the projects. However, there is no sign of them being abandoned.

She added: “Information about new research by an American doctor has also been published which says that living too close to wind turbines can cause illness such as heart disease, tinnitus and more, and that they should not be built closer than two kilometres to someone’s home.”

Tavira Câmara president Macário Correia told the Algarve Resident: “The production of wind energy is a positive thing for the council because it is a renewable energy source and is part of global policies and targets. These types of projects also provide employment in the area.”

He added: “However, there is always a flip side to the coin, which is why there is an environmental impact study being carried out. This will take into account the valid complaints and worries of the local population before anything is approved.”

No one from the renewable energy company Cavalum SGPS, SA was available for comment at the time the Algarve Resident went to press on Wednesday.