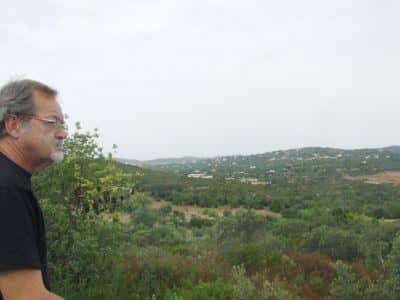 Residents living in the small hamlet of Mesquita Baixa, São Brás de Alportel, are up in arms over plans to construct a 20-hectare industrial estate on their doorstep.

Property owners, many of them retired, say they chose the location for its peaceful environs but now see their quality of life threatened by the construction of the park, which aims to solve the council’s lack of infrastructures for industrial businesses.

Following the creation of the Plano Director Municipal (PDM), the municipal urban development plan, in 1995, the Câmara designated a large area in Mesquita Baixa for industrial use, which incorporated half of the land owned by British residents Malcolm Bull and Christine Dearden, who purchased their property in 1997.

The couple became aware of the situation in September 2007 when a car crushing company started illegal work on a vacant plot of land 10 metres from their house.

“Trucks were dumping rubble on the site and oak trees were felled,” Malcolm Bull told the Algarve Resident.

Christine Dearden added: “We contacted the building inspector at the Câmara who told us that the workmen had no permission to alter the contours of the land and were later ordered to stop all work.”

It was at this stage that Malcolm and Christine were informed that their house was part of the industrial zone.

“The noise of a car crushing plant would be unbelievable,” said Malcolm Bull.

However, São Brás de Alportel Mayor António Eusébio said that the building of a scrap yard in that location would only go ahead if the company in question met all the requisites by law.

“I am sympathetic with the owners but when they purchased their house, half of their land was already industrial.”

He added: “I don’t know if a scrap yard can be placed there. We will need to await the results of environmental evaluations and feedback from the Industry Ministry.”

Portuguese resident Délio Andrade, who bought his house in 2007, said that although his property is right next door to Malcolm’s, his land is part of REN, or national ecological network, and therefore protected land and not included in the industrial zoning.

“I know Almargem (environmental association) contacted the Mayor over this situation but don’t know what the response was.

The Algarve Resident spoke to João Santos from Almargem who said: “We obtained an evasive answer from the Câmara. This contact was made over a year ago, so I’m not sure how the situation is developing. We were just shocked to hear that a car crushing company had purchased a plot next door to a residential area when the area for the industrial estate is so large.”

Despite several petitions from residents against the project, the Mayor says he has to think about the local economy. “The industrial park will help towards developing the local economy and therefore bring much needed jobs to the area.”

Industrial sectors that are expected to set up base in the park include cork related industries, car parts factories and warehouses. According to the Mayor, a project for a retail park could also be in the pipeline, which, he says, would add value to properties in the area.

Although plans for the industrial estate still await the results of an environmental impact study, a spokesman for the Câmara said the project was in “very advanced stages” and it was unlikely that it would be refused.

“All infrastructures would be in place to ensure minimal disruption to the community and the environment,” he said.

São Brás de Alportel Mayor says he is hopeful that work on the industrial park starts before the end of the year. A public consultation period would be held after the summer.

Those wishing to know more about the project or would like to object to it, should book an appointment with the Mayor by ringing his office on 289 840 023.