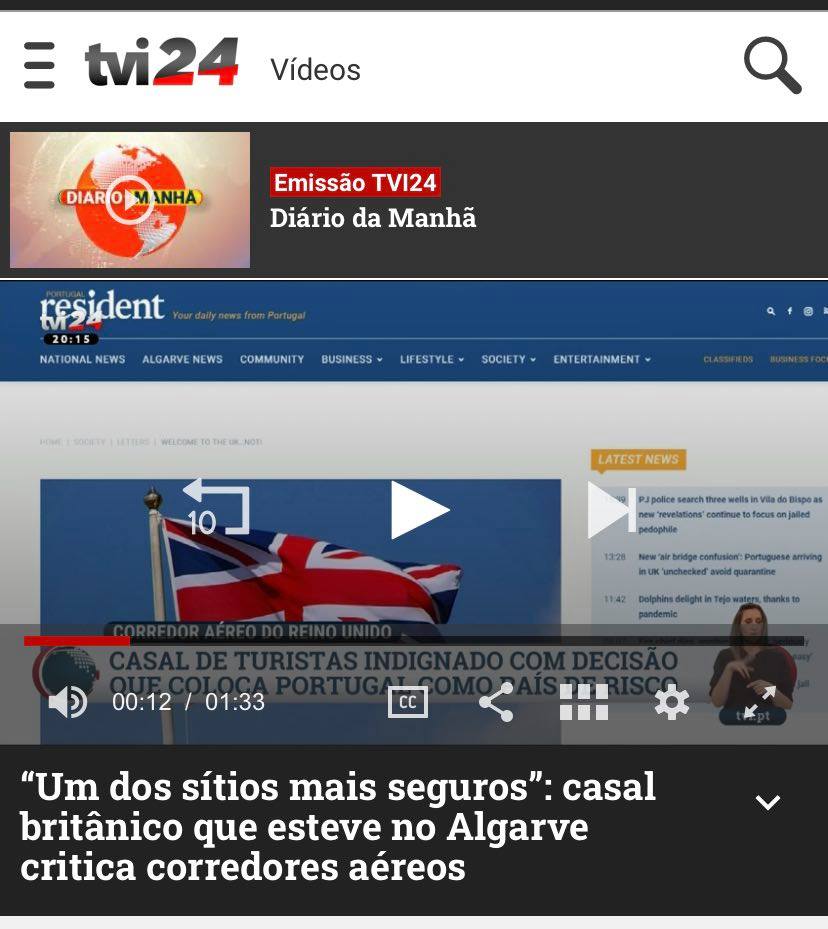 The frustrations of a couple of Portugal Resident readers over the UK’s deeply-damaging exclusion of Portugal from its list of ‘safe countries’ to travel to during the pandemic have been aired on primetime national TV.

Channel TVI24 ran with the story last night, taking the viewpoint from a letter published in both our online and paper editions (click here).

Running with the headline: “One of the safest places” – referring to the Algarve – the station highlighted the experience of Tom and Gill Blades, returning to the UK after spending four months in their home here in Portugal.

Says TVI, while the Blades’ feel Portugal has been dealing with the pandemic “in an exemplary way”, their opinion of their home country is of one with a “chaotic handling” of the situation, larded with “ineptness” and arrogance.

“So, the UK wants people who have been in probably the safest place in Europe who arrive in what is definitely the least safe country in Europe to quarantine? Hmmm!” the couple wrote – describing the stark differences of leaving a country where masks and hand sanitisers are ubiquitous for another where there is little evidence of either.

Not even airport personnel were wearing masks, wrote the couple.

As the short excerpt concluded, the Blades’ letter shows “two more voices of discontent over the way their government has dealt with the pandemic by excluding Portugal” from quarantine-free travel.

TVI’s exposé came on the day Lusa news agency reported that some Portuguese families flying into UK have managed to skip the requirement to quarantine altogether, because no one at passport control bothered to ask them where they had flown in from (click here).

It also preceded new confusion, this time instigated by Belgium which changed its travel advice to include the Algarve and Alentejo as “areas to be avoided”.

Belgian holiday homeowners already here are fuming. Said one: “The Algarve is many times safer than Belgium. There are fewer cases and deaths compared to our country. Belgium has one of the highest death rates per 100,000 inhabitants in the world! The risk of contagion in our area of the Algarve is almost zero. Our nearest neighbours are living  200 m away, supermarkets and shops, cafes and restaurants are almost empty… and yet the people here have been made victims, to suffer stupid decisions and directives from stupid governments”.