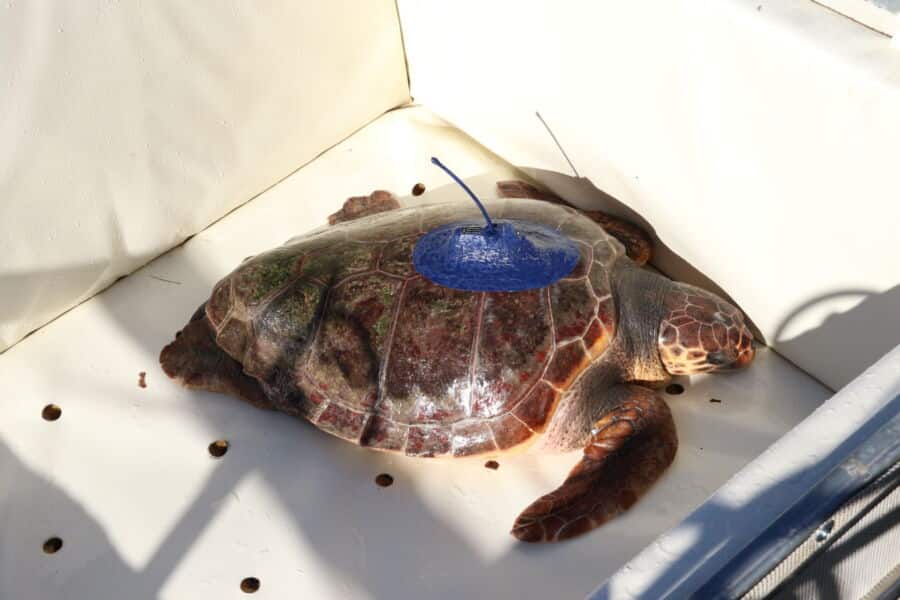 Loggerhead sea turtle was nursed back to health at Zoomarine

A rescued sea turtle has been on quite a journey since being returned to the sea last month off the Algarve coast with a tracker on its shell.

Salina is a loggerhead sea turtle that was rescued from the banks of the Guadiana River by a fisherman in June 2021.

The turtle was found stuck in fishing nets, at risk of developing pneumonia due to water inhalation, and was taken to Zoomarine’s rehabilitation centre Porto d’Abrigo in Guia (Albufeira).

After being nursed back to health, the turtle was returned to the sea on July 20, around 12 nautical miles (22 kilometres) south of Faro’s commercial docks.

“Since then, Salina has already swum 1,500 kilometres,” Zoomarine says in a statement to the press.

“In its first month since returning to the sea, this loggerhead turtle has swum past the Gulf of Cadiz, along the Tanger coast, has entered the Strait of Gibraltar, and since then, has been swimming in large circles in the Alboran Sea between Malaga (Spain) and El Jebha (Morocco).

“It is now around 345 kilometres (in a straight line) from the location where it was returned to the sea, and it seems to be excellent,” the theme park adds.

“If the conditions remain the same, Salina (…) should continue its path, indifferent to the contribution it is making to science – and that is the way it should be,” Zoomarine says.