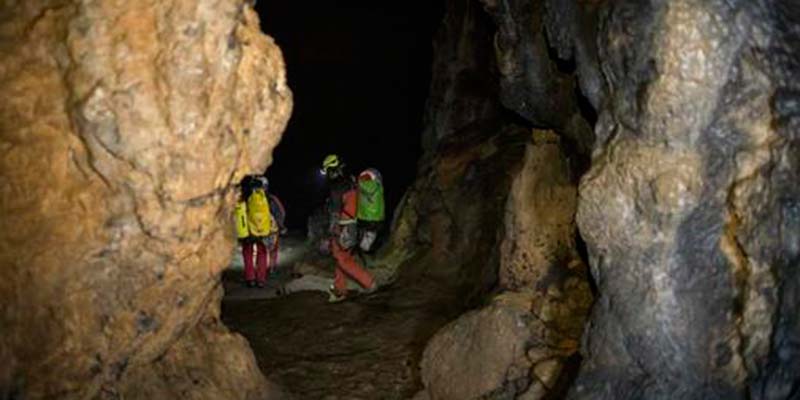 UPDATE: All four men have been rescued, ‘safe and sound’ – managing to leave the cave system ‘under their own steam’, say reports.

Said one: “We’re all fine. Our only concerns (throughout the two-day ordeal) were our families, because physically and emotionally we were fine, but they didn’t know that. I have already called my parents to tell them I’m fine. We had enough to eat. We still had food for more days if they had been necessary”.

The caving experts – all men in their mid-30s-40s – entered the cavern in Cantabria on Saturday morning, apparently intent on travelling between two well-known grottoes, Cueto and Coventosa.

When they didn’t return, three colleagues on the outside went in after them on Sunday, only to realise “that the elevated level of water” inside the caves “made progress impossible”.

Today, the official line is that the four Portuguese trapped inside the cave network are “fine and waiting for rescue teams to arrive”.

Thanks to reduced rainfall, the level of water inside the caves is apparently dropping by around 10 cms per hour.

This is “much slower than previously expected” but may give rescuers the window they need.

Rain isn’t expected in the area today (Monday) but it is forecast for Tuesday.

For now, little has been revealed on the identity of the speleologists or whether they are attached to any Portuguese universities.

The men are described as members of Porto’s “High relief mountaineering club” and very experienced.

Coordinator of the club’s speleology section, Vítor Gandra, told reporters that when the men began their descent they had no idea waters inside the cave system would rise so dramatically.

Rescue efforts are being coordinated by the Cantabrian government’s emergency services, as reports explain that the site is a point where three subterranean lakes converge.