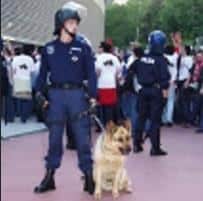 RESCUE DOGS in Lisbon have been subject to new and innovative training methods lead by the Grupo Operacional Cinotécnico do Corpo de Intervenção.

For the first time in Portugal, police officers have been taking dogs deep into the underground metro network of the capital, as part of their canine search and rescue training. The mission is to train the dogs to be able to uncover potential explosives in the shortest time possible.

This new training method has come about as a result of the increase in terrorist activity on transport networks, most notably the 2004, Madrid train bombings and the London bombings last July.

The first of these exercises took place just before Christmas beginning at Rossio station.

The group of 22 dogs were taken into the network and guided through all the small passageways, emergency exits and tracks, ensuring that they become accustomed to nature of the new environment.

“The objective of this exercise is for the dogs to adapt to the conditions of our metro system,” said the commander of the operation, Commissioner Pacheco.

“Some of these animals are only puppies, only seven or eight-months-old. Putting in them in this situation now will make them excellent rescue dogs in the future,” he furthered.

Despite carrying out similar exercises in the past on Lisbon’s metro system, this is the first time that the dogs have had access to the intricate system of passageways between metro stations.

According to Commander Pacheco, “this type of training is vital in an emergency situation as the dogs will be able to access areas humans cannot get to easily,” furthering that “the dogs need to get used to an atmosphere where, at times, accessing areas can be difficult. This type of training will ensure that they avoid becoming trapped and also make them accustomed to the mixed scents present in underground situations”.

The exercise had two main objectives: to train the dogs to search for explosives and also to train them to search and rescue missing bodies.

The dogs are part of the first ever dog training school, which recently opened in Leiria (central Portugal). Once they have completed their basic training they are sent to civil protection services such as the GNR and bombeiros where they are integrated into the team to aid in national security.