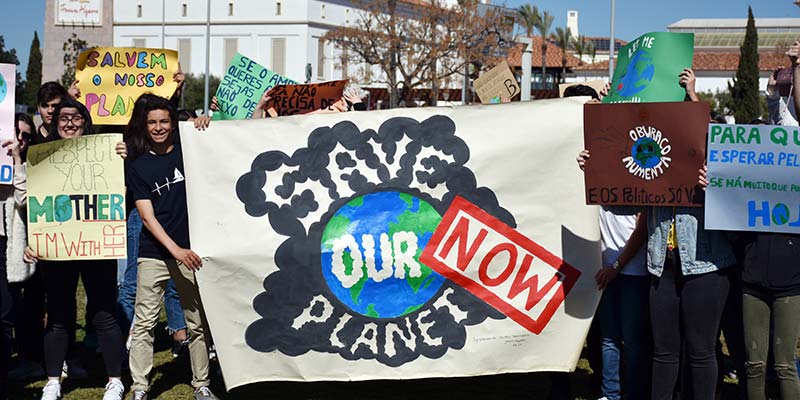 Climate change remains a taboo subject for many people including the president of the United States, but at the recent Climate Change Leadership Porto Summit, the keynote speaker, former vice-president Al Gore, reiterated the alarming scientific evidence for global warming.

Meanwhile, a new analysis claims that the five largest oil and gas companies in the world spend nearly $200 million annually in lobbying to delay, control or block policies to tackle climate change. Millions of dollars are being spent on targeted Facebook and Instagram ads by the global oil giants and related organisations to promote the benefits of increased fossil fuel production, according to the report published by InfluenceMap (https://influencemap.org).

Trump has been described in the Guardian newspaper as using “Stalinist tactics” to discredit opinions on climate change, yet an ever-growing range of experts and activists are warning that global warming is the greatest threat to human civilisation and the survival of a huge number of other species on the planet.

Last year’s keynote speaker in Porto was former US President Barack Obama. With such backing, what is known as the Porto Protocol is committed to adopting and promoting concrete actions – however small – to help reduce the impact of a changing climate.

In the wake of the historic Paris Agreement, the Porto Protocol welcomes participation by institutions, companies and individuals from all areas of activity.

Elsewhere, the perceived perils of global warming have brought together all sorts of unlikely bedfellows, including the head of the Catholic Church Pope Francis and the evolutionary biologist and arch-atheist Richard Dawkins. One of the only things these two agree upon is that global warming is caused by humans and not by God.

Millions of schoolchildren, in Portugal and 111 other countries, have been protesting against insufficient efforts to combat the potential consequences of climate change that are threatening their very right to life (click here).

The latest Porto conference was but a prelude to a major summit to be convened by former prime minister of Portugal, António Guterres. As the current UN secretary-general, Guterres will bring world leaders from government, finance, business and civil society to the Climate Action Summit in New York on September 23, 2019.

This will be held exactly one year before countries will have to enhance their national climate pledges under the 2016 Paris Agreement.

According to Guterres, “only a significantly higher level of ambition will do”.

To that end, the summit will focus on areas that go to the heart of the problem – the sectors that create the most carbon dioxide and other greenhouse emissions – and the areas where building resilience will make the biggest difference, he says.

Guterres is on record as describing climate change as “the defining issue of our time – and we are at a defining moment”.

He has expressed concern that climate change is moving faster than humans are.

“If we do not change course by 2020, we risk missing the point where we can avoid runaway climate change, with disastrous consequences for people and all the natural systems that sustain us.”

Guterres has appealed for leadership from politicians, entrepreneurs and scientists, as well as the public at large.

“We have the tools to make our actions effective. What we still lack – even after the Paris Agreement – is the leadership and the ambition to do what is needed.
“Let there be no doubt about the urgency of the crisis. We are experiencing record-breaking temperatures around the world.”

According to the World Meteorological Organisation, the past two decades have included 18 of the warmest years since 1850 when records began.

Extreme heat-waves, wildfires, storms and floods are leaving an unprecedented trail of death and destruction, but they have already become almost commonplace occurrences. The devastating events in the former Portuguese colony of Mozambique and neighbouring countries are but the latest examples.

Scientists have been warning us over and over again for many years but far too many leaders have refused to listen, says the UN.

Among the many potential consequences – if global warming is not properly controlled – are even greater mass migrations northwards of indigenous people from Africa. And in southern Europe it could inhibit traditional agricultural production such as vines and introduce deadly tropical pests and diseases.

To date, over 180 countries have joined the Paris Agreement to minimise greenhouse gas emissions. Guterres seems optimistic: “Climate change is a race we can win. It’s a race we must win,” he says.

Not everyone, however ¬- particularly in the United States – is convinced that humans are causing global warming. According to the InfluenceMap report published at the end of last week, Exxon Mobil, Chevron, BP, Royal Dutch Shell and Total were the five main companies leading the field in a direct lobbying process against policies to tackle climate change. Increasingly they are using social media to push their agenda to weaken and oppose any meaningful legislation to tackle global warming.

The report claims these campaigns were misleading the public about the extent of the oil companies’ actions because while publicly endorsing the need to act, they are massively increasing investment in a huge expansion of oil and gas extraction. In 2019, their spending will increase to $115 billion with just 3% of that directed at low-carbon projects.

Shell said in a statement: “We firmly reject the premise of this report. We are very clear about our support for the Paris Agreement, and the steps that we are taking to help meet society’s needs for more and cleaner energy.”

Chevron said it disagreed with the report’s findings, insisting it is “taking prudent, cost-effective actions and is committed to working with policymakers to design balanced and transparent greenhouse gas emissions reductions policies that address environmental goals and ensure consumers have access to affordable, reliable and ever cleaner energy.”

Photo: The students’ march for climate change in Faro on March 15