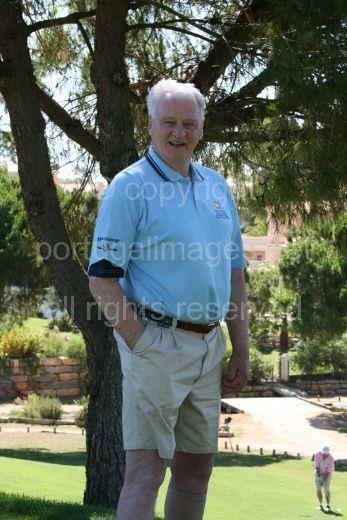 Sir Bobby Robson, one of England’s most successful football managers and a regular visitor to the Algarve, died aged 76 on Friday, July 31, in the presence of his family in County Durham, UK, after battling with five bouts of cancer.

Sir Bobby was regarded as one of football’s best and most charismatic coaches as well as being highly respected for his annual charity golf event in the Algarve in aid of the Refúgio Aboim Ascenção children’s home in Faro.

Dr Luís Villas Boas, director of the children’s home, told the Algarve Resident: “It is with an extremely heavy heart and great sadness that we see one of Britain’s greatest citizens leave us. It is an irreplaceable loss for the children, myself and all the staff at the Refúgio.

“We have his portrait on our wall and his memory will be honoured by us. He was a wonderful man.”

The start of July marked the sixth anniversary of the Sir Bobby Robson Celebrity Golf Classic, which took place annually at the Vila Sol Vilamoura Spa and Golf Resort.

Sporting legends such as Newcastle footballer, Alan Shearer, former league manager Ron Atkinson, and manager of Sunderland Steve Bruce were among the celebrities who came to Vilamoura to play a round with Sir Bobby during the tournament’s six year history and helped raise more than 320,000 euros for the children’s home.

Former Manchester United footballer Willie Morgan told the Algarve Resident: “I knew Sir Bobby very well from his early days at Ipswich town, he was a lovely man and I saw him often in the Algarve.

“It’s a very sad day for football. He was one of the nicest men in the game, a true gentleman.”

Sir Bobby’s final public appearance was at Saint James’ Park, Newcastle on Sunday, July 26 as former England footballers beat their German opposition with a 3-2 victory during a match in aid of his charity.

Sir Bobby was taken onto the pitch in his wheelchair, introduced to both teams and presented with a lifetime achievement award by UEFA before kick-off.

Paul Gascoigne, Peter Shilton, David Platt, Mark Wright, Des Walker, Peter Beardsley and John Barnes were among the players from England’s 1990 world cup semi-final team in Italy, on show in front of a crowd of 33,000.

Since his death, more than 15,000 fans have paid tribute to Sir Bobby at the stadium with flowers, flags and banners.

A statement released by the family states that the funeral will be a private family affair, although a thanksgiving service in celebration of Sir Bobby’s life will be held at a later date for his many friends and colleagues.